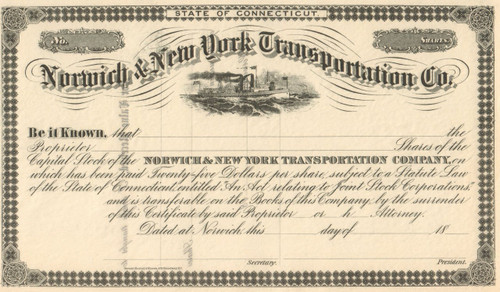 Very nice collectible stock with a great engraved vignette of a steamship paddle wheeler  at sea. Unissued and not cancelled. Circa 1860 from company records. Dated 18__.

The company ran steamers across the Long Island Sound. The Norwich & New York Transportation Company was organized in 1860 to operate passenger and freight steamers between New York City and New London and Norwich, Connecticut. It was later owned by Norwich and Worcester Railroad Company (a company leased to the New England Railroad Company) , acquired by New York, New Haven, & Hartford Railroad Company in 1899.

In 1904, its shares were purchased by the railroad's New England Navigation Company. It was, for many years, the only means whereby the New England Railroad could reach New York City over its own property.