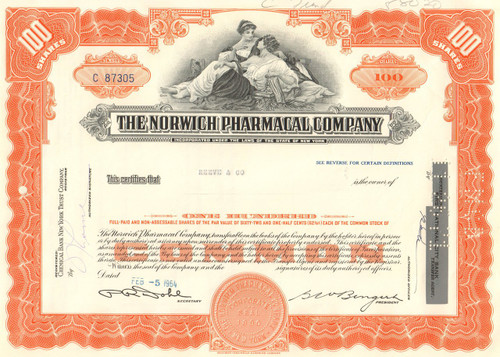 The company was started in 1855 by the Rev. Lafayette F. Moore, a Baptist preacher, who went into business as “L.F. Moore Pill Manufacturer,” in a rented room on Mitchell Street.  He formed a partnership with Oscar G. Bell in 1886 and with the increased business they moved to a building on East Main Street.

Later that year, Mr. Moore left the company.  Then Mr. Bell and two other partners formed the Norwich Pharmacal Company, which was incorporated in 1890.  The company improved an old formula for a surgical dressing and “Unguentine” grew to be the mainstay of the company for more than four decades.  Around 1901, the company acquired, “Mixture Cholera Infantum” from a doctor who developed it.  This was for the treatment of “diarrhea cholera,” a serious threat to young children.  Adults also found the formula provided a relief of indigestion and diarrhea.  Acetylsalicylic acid (Norwich aspirin) tablets were added to the company’s product line. In 1939, Norwich Pharmaceutical stock was listed on the New York Stock Exchange.

The company then renamed the formula Pepto-Bismol with its famous pink color.  The company has continued to grow and entered the field of basic research along with manufacturing.  It has developed and manufactured Furadantin, Macrodantin, and Norwich Aspirin to name a few.

During World War II, the company earned the Army-Navy ‘E’ Award with four added stars in recognition of its support of the troops and war effort. In 1982, the company, then called Norwich Eaton Pharmaceuticals, became a wholly owned subsidiary of the Procter & Gamble Company. In the mid-1990s, Norwich constructed an Intermediate Potency solid dose form facility, from which the osteoporosis drug Actonel was launched.