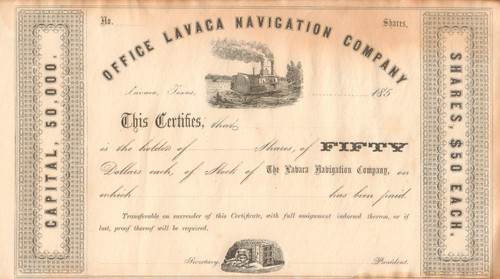 Great older dredging company with interesting area history radio collectible.  Nice vignette of a paddle wheeler on a river.  Unissued and not cancelled. Moderate foxing/aging on the edges and into the certificate face. Dated 185_ but circa 1857 from company records.

Incorporated 1857 , the company was formed to dredge the channel at Port Lavaca TX to support the San Antonio and Mexican Gulf Railroad Company access to the sea.  Large dredges were brought down from New York to complete the work. Not all efforts were supportive of the development.

Enoch Jones had recruited financial backing for the SA&MG in the North, and these supporters preferred Port Lavaca as the Gulf terminus; the choice prevailed. The line was completed only to a distance of five miles from Port Lavaca by late 1857, a modest accomplishment that nevertheless prevented forfeiture of the charter and entitled the company to receive from the state 58,000 acres in land grants that could then be sold to cover construction expenses.

The development from Port Lavaca continued to worry the Indianola interests, who chartered the Indianola Railroad Company in 1858 to build a line from Indianola through Victoria and Gonzales to Austin, to connect with the Memphis, El Paso and Pacific Railroad Company. To prevent duplication of lines, however, the state required the Indianola to connect with the SA&MG track just north of Port Lavaca, at a place later called Clark's Station. By the outbreak of the Civil War the Indianola line was surveyed and graded to Clark's Station, a distance of fifteen miles, but no track had been laid; the ties were still on the docks at Indianola.

The San Antonio and Mexican Gulf, suffering financial difficulties and unable to complete the last two miles of track to Victoria, was reorganized and refinanced in 1859 and completed construction to Victoria in 1860 or 1861. In December 1862, however, when Union forces threatened the Matagorda Bay area, Gen. Magruder, Confederate commander of the Texas, New Mexico, and Arizona district, ordered Maj. Shea to destroy the track and the Indianola railroad ties still on the wharves. The action hindered the Union forces that finally occupied Port Lavaca and Indianola in late 1863.

In 1865–66, during Reconstruction, the federal government rebuilt the tracks from Port Lavaca to Victoria at a cost of $45,000, which was levied against the owners. Though they were unable to make the payment, the government allowed the line to continue operation. The owners, unable to secure locally the financial means to purchase the government lien and unwilling to try in the North, secured a contract with English capitalists to cover the debt, build the branch to Indianola, and extend the line into DeWitt County and even to San Antonio; but the deal fell through. In 1870 the United States government foreclosed on the property.