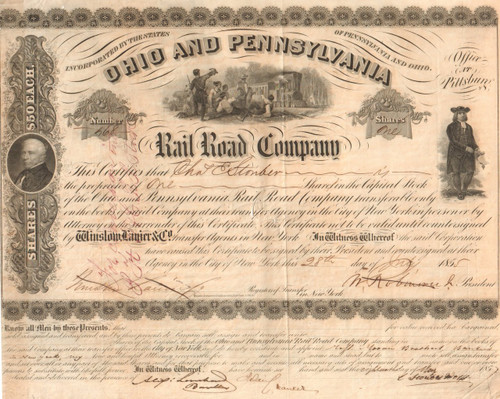 Fantastic and rare RR piece with multiple vignettes - the top has an early steam train with onlookers waving, William Penn to the right, and founder to the left. Based in Pittsburgh, PA. Certificate measures 9.5" by 11.5" with bottom stub. Dated 1855.

The Ohio and Pennsylvania Railroad was chartered in Ohio on February 24 and in Pennsylvania on April 11, 1848 to build from Allegheny City (annexed by Pittsburgh in 1907) west to Crestline, Ohio on the Cleveland, Columbus and Cincinnati Railroad. It was organized on June 15, and construction began on July 4, 1849. The first section, from Allegheny City west to New Brighton, opened July 30, 1851. Extensions opened to New Galilee on October 22 and Enon Valley November 19. On November 27, 1851 a section between Salem and Alliance, Ohio was completed, not yet connected to the rest.

On December 8, the east section was extended west to East Palestine, Ohio, with a stagecoach transfer provided for through travel. Further sections opened January 3, 1852 west to Columbiana, and on January 6 the gap between Columbiana and Salem was filled. In conjunction with the Cleveland and Pittsburgh Railroad, connecting at Alliance, a through line was provided between Cleveland and Pittsburgh. On March 11, 1852, an extension west to Massillon was opened with an excursion. On August 10, 1852 a further extension from Massillon west to Wooster opened. The line west to Mansfield was finished April 8, 1853, and the full line to Crestline opened April 11. With this it formed part of a through line to Cincinnati via the Cleveland, Columbus and Cincinnati Railroad.