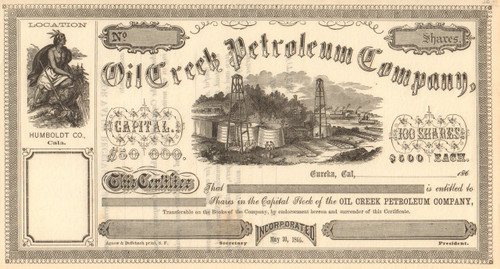 Great historical piece with a stunning vignette of an early oil drilling and refinery scene.  Indian engraving to the left. Unissued and not cancelled. Circa 1865 from issued examples. Great price on an uncommon oil piece.

Incorporated in May 1865 in Eureka CA..  This company represented the very first oil drilling and refining in California with operations in Humboldt County.

Although Indians and Spanish explorers had known of and used local oil seepages for centuries and the search for commercial production had begun on several fronts in the 1850s, the actual birth date of California's oil industry may be set as 1865, with the first commercial sale of oil refined in the state (by the Stanford brothers) from a well drilled in the state (on the Matthole River in Humboldt County). The fascinating text and the impressive array of photographs here assembled reveal the variety and vigor of the development that ensued: from the "world's smallest producing lease," on Signal Hill, to the derricks sharing Huntington Beach with the bathers, to the millions of mice infesting the Taft oil field in 1926-27; from the mounted patrols keeping livestock out of the Coalinga fields to the blinking light on a fence warning motorists of a well in the middle of a Los Angeles street.

First among the states in oil production in eighteen of the first thirty years of the twentieth century, California experienced a boom of immense proportions and extraordinary diversity. These illustrations, along with contemporary descriptions by many of those who worked the fields and a wealth of detail provided by the authors, graphically portray the scenes and characters of California's second great mineral rush. An epilogue takes the boom up to the shift in production to the offshore leases and the controversy surrounding them.