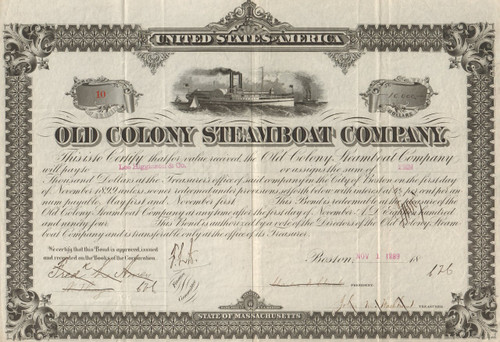 This great certificate has a fantastic vignette of steamship paddle wheeler with smaller sailboats nearby. Larger  certificate measuring 9" by 13". Dated 1889.

In 1889, the Thames River railroad drawbridge opened at New London, Connecticut, enabling direct, through rail service between Boston and New York City for the first time, marking the first serious threat to the existence of the Line. The affordability of the railroad and the onset of the mainstream automobile, as well as the creation of the Cape Cod Canal were also factors that the Line could not grow to withstand. After July 1937, the Line was no more. The remaining vessels (Plymouth, Priscilla, Providence and Commonwealth) fetched only 88,000 dollars when put up for sale. They were towed to Baltimore and were scrapped.