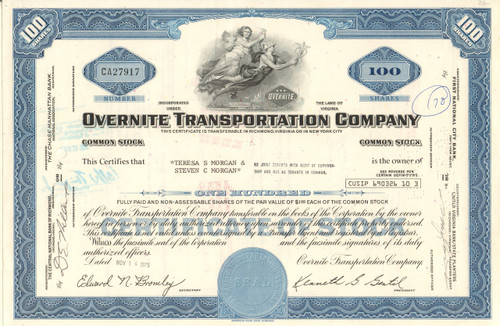 Nice trucking and shipping collectible.  Great vignette of classical figures flying over a semi and the company logo. Issued and cancelled. Dated in the 1970's (varies).

Overnite Corporation is a leading interstate trucking company serving all 50 states, Canada, Mexico, Puerto Rico, and the U.S. Virgin Islands. It transports a variety of products including machinery, tobacco, textiles, plastics, electronics, and paper products. The company garners over 90 percent of revenues from its less-than-truckload (LTL) business; in an LTL shipment, Overnite fills its truck with freight from several different shippers.

Its fleet includes 19,480 trailers, 5,299 tractors, and 114 straight trucks. Although it remains the nation's largest nonunion trucking company, Overnite has been hard-pressed by the International Brotherhood of Teamsters to unionize its workforce. The Overnite Trucking Corporation was acquired by Union Pacific Corporation in 1987, and Union Pacific set up Overnite Corporation as the holding company for Overnite Trucking and Motor Cargo Industries. Refocusing on its core rail business, Union Pacific planned to launch an initial public offering (IPO) of Overnite in 2003 or 2004.

J. Harwood Cochrane, founder of Overnite, was one of nine children raised on an 85-acre Virginia farm. He dropped out of the tenth grade to work at an assortment of jobs. In 1929, at the age of 17, he took a job delivering milk, first by horse-and-wagon and later by truck. Four years later he went into business with his brother in Richmond. In January 1935 Cochrane struck out on his own, but soon lost his only two trucks in highway accidents. He had no insurance to cover the losses but received a secondhand Chevrolet truck furnished by his brother in payment of a debt.

After five years of bare survival, Overnite took its first step toward expansion in 1940 with the purchase of a small competitor. World War II enabled the company to make money transporting war supplies, and the Overnite fleet grew from seven to 31 trucks. These vehicles, however, were used vehicles with used tires, paid for out of earnings rather than bank loans because, according to Cochrane, "I was a second-class citizen. The railroads had everything sewed up." The situation changed in the late 1940s, when Southern cigarette producers and textile manufacturers began hiring truckers like Overnite.

Incorporated in 1947, Overnite reached net income of $100,000 the following year. It grew rapidly over the next decade, both by expansion and acquisition. It first issued shares to the public in 1957, and by 1963 it had acquired 24 companies.

In 1963 Overnite drivers were being paid 8.5 cents a mile, compared to the regional union rate of 9.5 to 10 cents. To keep Overnite's 1,100 drivers satisfied with their lot and resistant to Teamster organizing, Overnite had established an employee stock-purchase plan wherein payment was usually made through payroll deductions. In 1962 operating expanses consumed only 83 percent of revenue, compared to a national motor-carrier industry average of 96 percent. Overnite was able to keep this ratio under 90 percent until the 1990s. In 1967 alone the company acquired 28 carriers in whole or part. Its purchase of nine other companies from 1971 to 1974 enabled it to move into the states of Alabama, Delaware, Florida, Indiana, Kentucky, Maryland, Ohio, Pennsylvania, and West Virginia, and into Washington, D.C. At the end of 1974 Overnite was operating 41 terminals located in or around 14 states.

In 1976 Overnite acquired four more companies and opened terminals in Memphis, Columbus, and Washington, D.C. Terminals were established in Chicago and St. Louis in 1977. The acquisition in 1978 of St. Louis-Kansas City Express Inc. enabled Overnite to expand its routes as far west as Kansas City. By this time the company was also serving six seaports: Baltimore, Charleston, Jacksonville, Norfolk, Savannah, and Wilmington, North Carolina. Deregulation and the severe 1981-82 recession drove about 300 motor carriers out of business. Overnite, however, thrived once more. In 1984 its routes stretched north to Boston, south to Tampa, and west to Los Angeles. Some 107 terminals in and around 31 states and the District of Columbia provided food, fuel, and lodging to its drivers.

In October 1986 Cochrane sold Overnite to Union Pacific Corporation for $1.2 billion, the largest amount ever paid for a trucking company. Cochrane, who stayed on to run the company, and other family members garnered $47.6 million from the deal. Union Pacific had made the purchase to combine Overnite's 4,000 trucks with its trailer-carrying railroad flatcars in a nationwide network. Cochrane retired as chairman of Overnite in 1989 and was succeeded by Thomas W. Boswell. Boswell resigned in March 1995 following problems that ironically arose from a 28-day Teamster strike against rival carriers in 1994. Overnite took on more business as a result of the strikes, but had its reputation hurt as the size of its obligations resulted in slow deliveries and lost and damaged goods.

Overnite was serving 95 percent of the population of the United States in the mid-1990s. It had 173 service centers, located primarily in the eastern, southeastern, and central United States and on the Pacific Coast, and boasted a fleet of 5,300 tractors and nearly 19,000 trailers. The company also showed a continued concern with maintaining its stature.