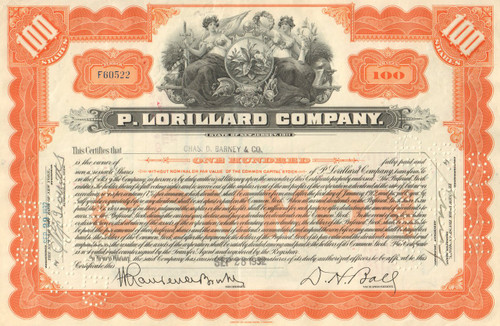 In 1925, Lorillard experienced great transition as Benjamin Lloyd Belt became president. Having been with the company since 1911, Belt made some decisions that made the company profitable. He began to prioritize on promoting the Old Gold brand instead of Beech-Nut chewing tobacco.,[4] using such tactics as Old Gold on Broadway and sponsoring Artie Shaw's program on CBS Radio from November 20, 1938 until November 14, 1939. Belt was still president when he died in 1937.

Testifying under oath before Congress in 1994, Lorillard's CEO Andrew Tisch said that he didn't believe that nicotine is addictive nor that cigarette smoking causes cancer. In 1997, the firm's headquarters moved to Greensboro from New York City. The firm also manufactured cigarettes in Louisville, Kentucky. In 1997, Lorillard was one of four entities to initiate negotiations leading to the 1998 Master Settlement Agreement between "Big Tobacco" and 46 U.S. states.

Loews created the Carolina Group as a holding company for its tobacco assets in 2002; it proceeded to sell a minority stake in Carolina on the New York Stock Exchange. Carolina was controlled by Loews until May 10, 2006, when Loews Corporation sold 15 million shares of Carolina Group, lowering its holding from a controlling 53.7% to a plurality 46.3%. The sale is valued at approximately $740 million.

In 2006, Lorillard was convicted of racketeering under RICO, along with Philip Morris and RJ Reynolds. The Supreme Court has upheld the verdict, in which Judge Kessler wrote, "[W]hat this case is really about . . . is about an industry, and in particular these Defendants, that survives, and profits, from selling a highly addictive product which causes diseases that lead to a staggering number of deaths per year, an immeasurable amount of human suffering and economic loss, and a profound burden on our national health care system. . . . In short, Defendants have marketed and sold their lethal product with zeal, with deception, with a single-minded focus on their financial success, and without regard for the human tragedy or social costs that success exacted."

In 2008, Lorillard Tobacco was entered into a separation agreement with its parent company Loews, and became an independent publicly traded company. In order to comply with FDA regulations, Lorillard had until June 22, 2010, to rebrand tobacco products marketed as "Lights", "Ultra-Lights", "Medium", "Mild", "Full Flavor", or similar designations to belie the false impression that some tobacco products are comparatively safe.

In December 2010, a Boston jury returned a $151 million verdict against Lorillard Tobacco Company for giving out free samples of cigarettes to children in urban housing projects in the 1950s. The plaintiff, Marie Evans, was nine when she first received these samples, according to documents filed by her attorneys. She died of lung cancer before trial.

In 2014, after negotiations with PETA, Lorillard announced it would no longer test its products on animals. In a statement, the company said they "will use scientifically accepted or validated alternative test methods and technologies that avoid the use of animals. Such methods and tests may include in vitro cell culture tests, advanced chemistry tests and computer modeling programs."

On July 15, 2014, Reynolds American agreed to buy Lorillard, for $27.4 billion, uniting two of the country’s largest tobacco producers in a bet that bigger is safer in a declining industry. The deal also included the sale of the Kool, Winston, Salem, and blu brands to Imperial Tobacco for $7.1 billion. The deal was finalized on June 12.