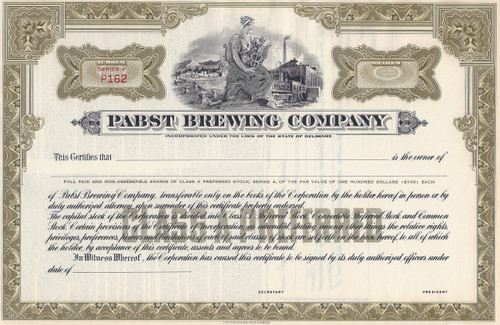 Pabst is headquartered in Los Angeles, California. On November 13, 2014, Pabst announced that it had completed its sale to Blue Ribbon Intermediate Holdings, LLC. Blue Ribbon is a partnership between American beer entrepreneur Eugene Kashper and TSG Consumer Partners.

The original brewery was founded in 1844 as The Empire Brewery, later Best and Company, by brewer Jacob Best. The brewery was run by Jacob, Sr. and his sons Phillip, Charles, Jacob, Jr., and Lorenz; Phillip took control of the company in 1860. Later, in 1863, Frederick Pabst, a steamship captain and son-in-law of Phillip Best, bought a share in Phillip Best Brewing Co. By 1874 Phillip Best Brewing Co. was the nation's largest brewer. During Prohibition, Pabst stopped making beer and switched to cheese production, selling more than 8 million pounds of Pabst-ett cheese. When Prohibition ended, the company went back to selling beer, and the cheese line was sold to Kraft.

Pabst was renowned in Milwaukee for its brewery tours. Visitors to Pabst's tour were rewarded with sometimes bottomless glasses of beer at its end-of-tour Sternewirt Pub. Complete with a statue of Captain Frederick Pabst and waitresses pouring from pitchers of Pabst Blue Ribbon, Pabst Bock, and Andeker, the pub was popular with both tourists and locals, especially students from nearby Marquette University and the University of Wisconsin–Milwaukee. Pabst's sales reached a peak of 15.6 million barrels in 1978 and then went into steep decline.