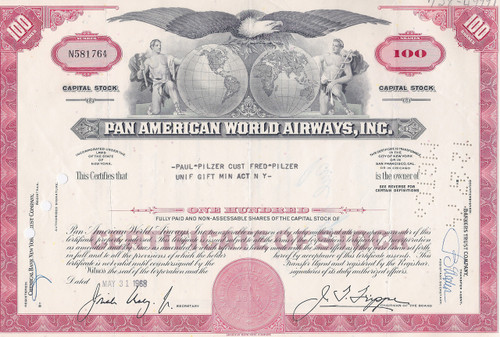 Stunning vignette of two Greek male figures flanking two hemispheres of the Earth with a large eagle spreading its wings over the scene. Dated from the 1950's and into the late 1960's when Juan Trippe was president.  Certificates have Juan Trippe printed signature as president or chief executive officer. We are the only site to offer these historic stocks so cheap.

Please check out our other listing for certificates without Trippe as president (later pieces, after 1968) ~ same price as these but better color selections and sets.

Juan Trippe was born in Sea Bright, New Jersey, on June 27, 1899, the great-great-grandson of Lieutenant John Trippe, captain of the USS Vixen. Because of his forename, some people assumed he was of Spanish descent, but his family was actually Northern European in ancestry and settled in Maryland in 1664.

He enrolled at Yale University but left when the United States entered World War I to apply for flight training with the U.S. Navy. After completing training in June 1918, he was designated as a Naval Aviator and was commissioned as an Ensign in the U.S. Naval Reserve.However, the end of World War I precluded him from flying in combat. Demobilized from active duty, he returned to Yale University, graduating in 1921. While at Yale, he was a member of St. Anthony Hall and of the Skull and Bones society. Trippe was treasurer at the first-ever meet of the National Intercollegiate Flying Association in 1920.

After graduation from Yale, Trippe began working on Wall Street, but soon became bored. In 1922 he raised money from his old Yale classmates, selling them stock in his new airline, which he called Long Island Airways, an air-taxi service for the rich and powerful. Once again tapping his wealthy friends from Yale, Trippe invested in an airline named Colonial Air Transport, which was awarded a new route and an airmail contract on October 7, 1925. Interested in operating to the Caribbean, Trippe created the Aviation Corporation of the Americas. Based in Florida, the company would evolve into Pan American World Airways, commonly known as Pan Am.

Trippe served as the Chairman of the Board of Directors of the airline for all but about two years between the founding of the company and the Second World War.  Pan Am continued to expand worldwide throughout World War II. Trippe is responsible for several innovations in the airline world. Trippe quickly recognized the opportunities presented by jet aircraft and ordered several Boeing 707. The new jets allowed Pan Am to introduce lower fares and fly more passengers. In 1965, Trippe asked his friend Bill Allen at Boeing to produce an airplane much larger than the 707. The result was the Boeing 747, and Pan Am was the first customer.

Trippe gave up the presidency of the airline in 1968. He continued to attend meetings of the Board of Directors and maintained an office in the company's Park Avenue office building. Trippe suffered a stroke in September 1980 which forced him to cut back on his workload. He died after suffering a second stroke at his New York City home on April 3, 1981, at the age of 81. In 1985, Trippe was posthumously awarded the Medal of Freedom by United States President Ronald Reagan.