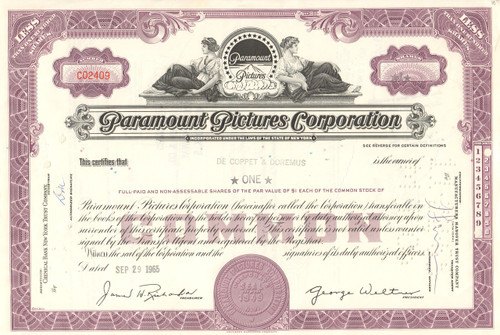 Paramount Pictures Corporation (formerly known as Famous Players-Lasky Corporation) is an American film studio, television production company and motion picture distributor, consistently ranked as one of the "Big Six" film studios of Hollywood. It is a subsidiary of U.S. media conglomerate Viacom. Paramount is a member of the Motion Picture Association of America (MPAA).

Paramount is the fifth oldest surviving film studio in the world after the French studios Gaumont Film Company (1895) and Pathé (1896), followed by the Nordisk Film company (1906), and Universal Studios (1912). Paramount Pictures dates its existence from the 1912 founding date of the Famous Players Film Company. Hungarian-born founder, Adolph Zukor, who had been an early investor in nickelodeons, saw that movies appealed mainly to working-class immigrants.By mid-1913, Famous Players had completed five films, and Zukor was on his way to success.  That same year, another aspiring producer, Jesse L. Lasky, opened his Lasky Feature Play Company with money borrowed from his brother-in-law, Samuel Goldfish, later known as Samuel Goldwyn. The Lasky company hired as their first employee a stage director with virtually no film experience, Cecil B. DeMille, who would find a suitable location site in Hollywood, near Los Angeles, for his first feature film, The Squaw Man.

Starting in 1914, both Lasky and Famous Players released their films through a start-up company, Paramount Pictures Corporation, organized early that year by a Utah theatre owner, W. W. Hodkinson, who had bought and merged several smaller firms. Paramount was the first successful nationwide distributor; until this time, films were sold on a statewide or regional basis which had proved costly to film producers.

In 1916, Zukor maneuvered a three-way merger of his Famous Players, the Lasky Company, and Paramount. Zukor and Lasky bought Hodkinson out of Paramount, and merged the three companies into one. The new company Lasky and Zukor founded, Famous Players-Lasky Corporation, grew quickly, with Lasky and his partners Goldwyn and DeMille running the production side, Hiram Abrams in charge of distribution, and Zukor making great plans. With only the exhibitor-owned First National as a rival, Famous Players-Lasky and its "Paramount Pictures" soon dominated the business.

In 1927, Famous Players-Lasky took the name Paramount Famous Lasky Corporation. Three years later, because of the importance of the Publix Theatres, it became Paramount Publix Corporation. Eventually, Zukor shed most of his early partners; the Frohman brothers, Hodkinson and Goldwyn were out by 1917 while Lasky hung on until 1932, when, blamed for the near-collapse of Paramount in the Depression years, he too was tossed out. Zukor's over-expansion and use of overvalued Paramount stock for purchases led the company into receivership in 1933. A bank-mandated reorganization team, led by John Hertz and Otto Kahn kept the company intact, and, miraculously, Zukor was kept on. In 1935, Paramount-Publix went bankrupt.

By the early 1960s, Paramount's future was doubtful. Founding father Adolph Zukor (born in 1873) was still chairman emeritus; he referred to chairman Barney Balaban (born 1888) as "the boy." Such aged leadership was incapable of keeping up with the changing times, and in 1966, a sinking Paramount was sold to Charles Bluhdorn's industrial conglomerate, Gulf + Western Industries Corporation. Bluhdorn immediately put his stamp on the studio, installing a virtually unknown producer named Robert Evans as head of production. Despite some rough times, Evans held the job for eight years, restoring Paramount's reputation for commercial success with The Odd Couple, Rosemary's Baby, Love Story, The Godfather, Chinatown, and 3 Days of the Condor.

n 1970, Paramount teamed with Universal Studios to form Cinema International Corporation, a new company that would distribute films by the two studios outside the United States. Metro-Goldwyn-Mayer would become a partner in the mid-1970s. Both Paramount and CIC entered the video market with Paramount Home Video (now Paramount Home Entertainment) and CIC Video, respectively.

Robert Evans abandoned his position as head of production in 1974; his successor, Richard Sylbert, proved to be too literary and too tasteful for Gulf + Western's Bluhdorn. By 1976, a new, television-trained team was in place headed by Barry Diller and his "Killer-Dillers", as they were called by admirers or "Dillettes" as they were called by detractors. These associates, made up of Michael Eisner, Jeffrey Katzenberg, Dawn Steel and Don Simpson would each go on and head up major movie studios of their own later in their careers.

Paramount's successful run of pictures extended into the 1980s and 1990s, generating hits like Airplane!, American Gigolo, Ordinary People, An Officer and a Gentleman, Flashdance, Terms of Endearment, Footloose, Pretty in Pink, Top Gun, "Crocodile" Dundee, Fatal Attraction, Ghost, the Friday the 13th slasher series, as well as Raiders of the Lost Ark and its sequels. Other examples are the Star Trek film series and a string of films starring comedian Eddie Murphy like Trading Places, Coming to America, and Beverly Hills Cop and its sequels.

In the 1990's, Paramount and its related subsidiaries and affiliates, operating under the name "Viacom Entertainment Group" also included the fourth largest group of theme parks in the United States and Canada which in addition to traditional rides and attractions launched numerous successful location based entertainment units including a long running "Star Trek" attraction at the Las Vegas Hilton.

On December 11, 2005, The Paramount Motion Pictures Group announced that it had purchased DreamWorks SKG (which was co-founded by former Paramount executive Jeffrey Katzenberg) in a deal worth $1.6 billion. The announcement was made by Brad Grey, chairman and CEO of Paramount Pictures who noted that enhancing Paramount's pipeline of pictures is a "key strategic objective in restoring Paramount's stature as a leader in filmed entertainment." The agreement does not include DreamWorks Animation SKG Inc., the most profitable part of the company that went public the previous year.