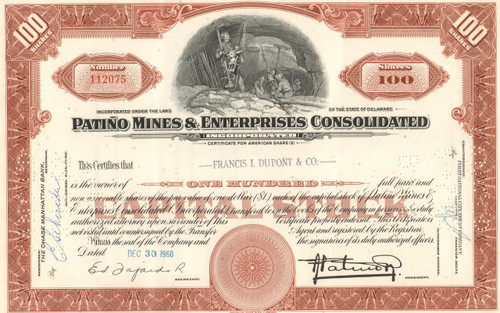 Simon Patiño (1868-1947) was a Bolivian capitalist and mining industrialist. Simon was a self-made success and had the great luck of hitting tremendous tin vein in 1899 for which he had to defend from claim jumpers. By the end of World War I, he had controlling interest in almost all tin mines in Bolivia.  Ultimately, he acquired control of the tin mines in the Malaysian Straits and the smelters in Europe, thus becoming the true Tin King. At that time, he was one of the wealthiest men on the planet.  Many of his Bolivian holdings were nationalized after the revolution of 1952, five years after his death.  Patiño lived much of his life in Europe and the US due to health issues and doctor's orders to live at low altitudes.

Incorporated in 1926 (on the NYSE), the company was formed by Simon Patino by consolidating his tin mining assets and rivals he acquired,  Patino mining operations were once the leading employer in Bolivia

The company was a consolidation of the Patiño company, owning properties at Uncia, with the Compafiia Estanfera de Llallagua, a' Chilean corporation owning contiguous properties at Llallagua. Before the consolidation these companies were deadly enemies, and there remained at the surface plant at Uncia the fortifications and underground defenses provided during the warfare between the two factions. Also, in the Azul, or "Blue" tunnel at the junction line between the two properties is a strong steel barricade still bearing marks of the bullets fired during the various armed tilts between the workmen of the two companies. The headquarters for the mining operations and the milling plant was moved since the consolidation from the original location at Uncia to the Llallagua side of the mountain, where the Chilean company's operations were carried on.