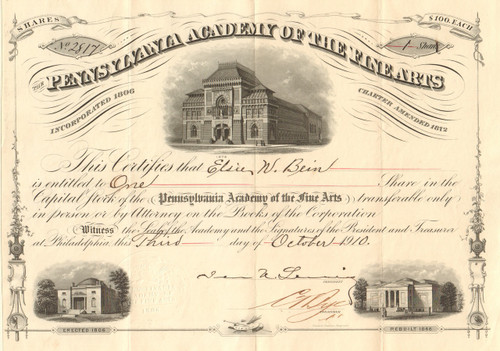 Rare fine arts piece with multiple vignettes of the academy's buildings since its founding. Issued and not cancelled. Dated 1910 - 1938.

The Pennsylvania Academy of the Fine Arts is a museum and art school in Philadelphia, Pennsylvania. It was founded in 1805 and is the first and oldest art museum and art school in the United States. The academy's museum is internationally known for its collections of 19th- and 20th-century American paintings, sculptures, and works on paper. Its archives house important materials for the study of American art history, museums, and art training. The Academy building is considered one of the finest surviving examples of Victorian Gothic architecture in America and was designed by the American architects Frank Furness and George W. Hewitt.

The Pennsylvania Academy of the Fine Arts (PAFA) was founded in 1805 by painter and scientist Charles Willson Peale, sculptor William Rush, and other artists and business leaders. It opened as a museum in 1807 and held its first exhibition in 1811, where more than 500 paintings and statues were on display. The first school classes held in the building were with the Society of Artists in 1810. The Academy was reconstructed after the fire of 1845, and 23 years later steps were taken to construct a building more worthy of its treasures, the current Furness-Hewitt building, which was constructed from 1871, and opened as part of the 1876 Philadelphia Exposition.

In 1876, former Academy student Thomas Eakins returned to teach as a volunteer. Fairman Rogers, chairman of the Committee on Instruction from 1878 to 1883, made him a faculty member in 1878, and promoted him to director in 1882. Eakins revamped the certificate curriculum to what it remains today. Students in the certificate program learn fundamentals of drawing, painting, sculpture, and printmaking (relief, intaglio, and lithography) for two years, after which they enjoy two years of independent study, guided by frequent critiques from faculty, students, and visiting artists.

From 1811 to 1969, the Academy also organized important annual art exhibitions from which significant acquisitions were made. Harrison S. Morris, Managing Director from 1892 to 1905, collected contemporary American art for the institution. Among the many masterpieces acquired during his tenure were works by Cecilia Beaux, William Merritt Chase, Frank Duveneck, Thomas Eakins, Winslow Homer, Childe Hassam, and Edmund Tarbell. Work by The Eight, which included former Academy students Robert Henri and John Sloan, is well represented in the collection, and provides a transition between 19th- and 20th- century art movements.

From 1890 to 1906, Edward Hornor Coates served as the tenth president of the Academy. In 1915, Coates was awarded the Academy's gold medal. Painter John McLure Hamilton, who began his art education at the Academy under Thomas Eakins.

Since its founding, the Academy has collected works by leading American artists, as well as works by distinguished alumni and faculty of its school. Today, the Academy maintains its collecting tradition with the inclusion of works by modern and contemporary American artists. Acquisitions and exhibition programs are balanced between historical and contemporary art, and the museum continues to show works by contemporary regional artists and features annual displays of work by Academy students. The collection is installed in a chronological and thematic format, exploring the history of American art from the 1760s to the present.

The Academy is well known for its longstanding 4-year Certificate Program. Since 1929, qualified students may apply for and receive a coordinated Bachelor of Fine Arts program at the University of Pennsylvania. Another BFA degree program is offered exclusively in-house (a recent addition) its Master of Fine Arts program, a Post Baccalaureate Certificate in Graduate Studies, and extensive continuing education offerings, as well as programs for children and families.