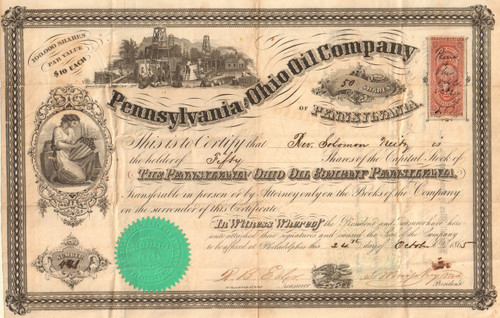 Rare oil collectible with great vignette of an early oil well operation with derricks and workers moving barrels. Side vignette of Liberty with an American shield.   Larger than normal certificate of the era at 8" by 12". Issued and not cancelled. Fold splits at the left side which appears repaired on the back with archival tape. revenue stamp attached at the upper right. Dated 1865.

Incorporated 1864 in Philadelphia PA, the company was part of the initial US oil boom at the end of the Civil War.  The company operated wells and refineries in the Western Pennsylvania and Eastern Ohio in the Marcellus formation. The company produced "white sand oil" but its transportation was limited and controlled by other companies.

The Pennsylvania oil rush was a boom in petroleum production which occurred in northwestern Pennsylvania from 1859 to the early 1870s. It was the first oil boom in the United States. The oil rush began in Titusville, Pennsylvania, in the Oil Creek Valley when Colonel Edwin L. Drake struck "rock oil" there. Titusville and other towns on the shores of Oil Creek expanded rapidly as oil wells and refineries shot up across the region. Oil quickly became one of the most valuable commodities in the United States and railroads expanded into Western Pennsylvania to ship petroleum to the rest of the country.

The rush to Pennsylvania created violent swings in the petroleum market for the first decade of the oil boom. In 1861, the proliferation of wells across the Oil Creek Valley pushed the price of oil down to 10 cents a barrel. In response, producers in the region formed the Oil Creek Association to restrict output and maintain a minimum price of $4 a barrel. By 1871, refining capacity had grown to over 12 million barrels per year, more than twice the amount of oil that was actually processed in that year. The first oil exchange in the United States was established in Titusville in January 1872 in response to rumors that a conspiratorial ring of crude oil traders in New York City had cornered the market. But as the decade progressed, larger producers, such as John D. Rockefeller’s Standard Oil, began to consolidate their holdings over the wells and refineries in the region, and the oil rush began to settle down.

By 1901, the Pennsylvania oil boom was over. The formation of the Standard Oil Trust in 1882 effectively established a monopoly over the industry in Pennsylvania, and the discovery of oil in Texas, California and Wyoming shifted the nation’s attention elsewhere.Pennsylvania continued to be a significant producer of petroleum for much of the 20th century, but the Oil Creek Valley had been permanently eclipsed.