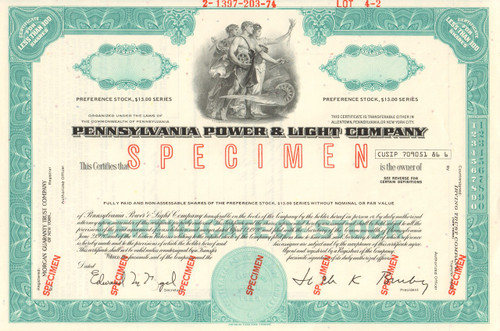 The PPL Corporation is an energy company headquartered in Allentown, Pennsylvania, USA. It currently controls about 8,000 megawatts of regulated electric generating capacity in the United States and delivers electricity to 10.5 million customers in Pennsylvania, Kentucky, and Great Britain. It also provides natural gas delivery service to 321,000 customers in Kentucky. PPL Electric Utilities (formerly known as PP&L and Pennsylvania Power and Light) is the PPL Corporation's primary subsidiary. The majority of PPL's power plants burn coal, oil, or natural gas. PPL also owns peaking plants, which require few operators and have a high profit margin due to their ability to rapidly come online when the price of electricity spikes.

Pennsylvania Power & Light was founded in 1920 out of a merger of eight smaller Pennsylvania utilities. It gradually extended its service territory to a crescent-shaped region of central and northeastern Pennsylvania stretching from Lancaster, through the Lehigh Valley into Scranton and Wilkes-Barre. In 1995, it reorganized as a holding company, PP&L Resources, which changed its name to the current PPL Corporation in 2000.

The company limited its activities to Pennsylvania until deregulation of electrical utilities in the 1990s encouraged PPL to purchase assets in other states. The largest of these transactions was PPL's 1998 purchase of 13 plants from Montana Power (leaving NorthWestern Energy - the buyer of the former Montana Power transmission and distribution systems - vulnerable to high "spot" prices on the energy market). This added over 2,500 MW of capacity and was the largest expansion in PPL's history. In 2014, those hydroelectric facilities were sold to NorthWestern.

On June 6, 2014, PPL announced it will be divesting its electrical generation facilities to a newly formed company, Talen Energy. On June 1, 2015, the Talen spinoff was completed, allowing PPL to concentrate on the transmission and distribution aspects of the electric utility business.