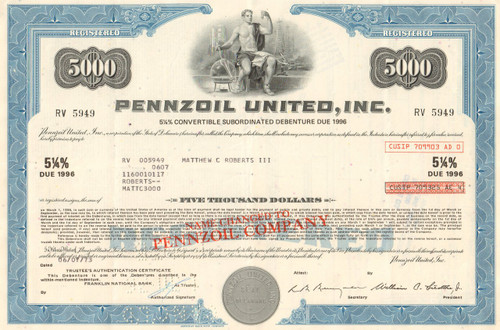 Nice $5000 bond with a classical make figure with chemistry equipment in front of oil well and refinery scenes.  Issued and cancelled. Dated 1970's.

Pennzoil is an American oil company founded in Los Angeles, California in 1913. In 1955, it was acquired by Oil City, Pennsylvania company South Penn Oil, a former branch of Standard Oil. In 1963, South Penn Oil merged with Zapata Petroleum; the merged company took the Pennzoil name. In 1968 United Gas Corporation became part of Pennzoil. During the 1970s, the company moved its offices to Houston, Texas. In 1977 a spin-off company was formed called Pogo, which stood for Pennzoil Offshore Gas Operators.

Pennzoil was headquartered in Pennzoil Place in Downtown Houston during the 1970s. In 1999 Pennzoil's E&P business was acquired by Oklahoma City-based Devon Energy and the Pennzoil-Quaker was purchased by Royal Dutch/Shell Group to form SOPUS—Shell Oil Products

Though not much emphasis has ever been placed on gasoline, Pennzoil does sell this product. In the early parts of the company's history, the gas stations were branded as Pennzip, though they were later changed to Pennzoil. For decades, Pennzoil gas stations were mostly marketed in western Pennsylvania, western New York, northern and eastern Ohio, and northern West Virginia. In the 1990s, Pennzoil gas experienced a bit of a revival when Pittsburgh area convenience store chain Cogo's began co-branding themselves with Pennzoil. The co-branding only lasted a few years, and Cogo's switched brands to BP and Exxon in 2001.

USAC National Championship drivers Al Unser and Johnny Rutherford were sponsored by Pennzoil in the Chaparral team. Rutherford won the Indianapolis 500 and the championship in 1980. From 1983 to 1990, Pennzoil sponsored the Team Penske driver Rick Mears during his CART World Series campaign, winning the 1984 and 1988 Indianapolis 500. IndyCar Series driver Sam Hornish Jr. drove for Pennzoil-sponsored Panther Racing from 2001 to 2003. Since 2011, Team Penske driver Hélio Castroneves hast been sponsored part-time by Pennzoil, most notably at the Indianapolis 500. Pennzoil's yellow car livery has been nicknamed the "Yellow Submarine".

In the NASCAR Sprint Cup Series, Dale Earnhardt, Inc. had a Pennzoil sponsorship for Steve Park in their No.1 car from 1998 to 2003. Richard Childress Racing driver Kevin Harvick had a Pennzoil sponsorship from 2007 to 2010. Penske Racing took over the Pennzoil sponsorship in 2011 with Kurt Busch and in 2012, it was moved over to A. J. Allmendinger and to Joey Logano in 2013. In the American Le Mans Series, Audi Sport North America was used Pennzoil Ultra lubricants brand in 2003 until 2008. Pennzoil has been the title sponsor of the Grand Prix of Houston since 2013.

In 1984, Pennzoil made an informal but binding contract with Getty Oil to purchase the company. The Texaco oil company encroached on the deal in an attempt to acquire Getty for itself. Pennzoil sued Texaco in Texas state court, alleging that Texaco tortiously induced Getty to breach the contract with Pennzoil. At first it was adjudicated by Judge Anthony J.P. Farris; it was finished by visiting Judge Solomon (Sol) Casseb of San Antonio. A jury awarded Pennzoil, represented by Joe Jamail and Baine Kerr, $7.53 billion in compensatory damages and $3 billion in punitive damages. Under Texas law, Pennzoil could secure a lien on all of Texaco's property in the state, unless Texaco posted a bond that covered the judgment, interests and costs of the lawsuit .

Before judgment could be entered in the Texas court and Pennzoil could obtain a lein, Texaco filed a suit in the U.S. District Court for the Southern District of New York, alleging that the Texas proceedings violated Texaco's constitutional rights. The District Court found for Texaco, and the Second Circuit affirmed.[8] Pennzoil appealed the federal court case to the United States Supreme Court. Laurence H. Tribe argued for Pennzoil, whereas David Boies argued for Texaco. The Supreme Court reversed the circuit court decision, on the grounds that the New York court should have abstained interfering with the decision of a state court.

Texaco also appealed the Texas state court decision. The Texas Court of Appeals upheld the jury verdict, but found that the trial court had abused its discretion by not suggesting a remittitur (reduction of damages). It would allow the verdict to stand if Pennzoil filed a remittitur of two billion dollars, making the punitive damages award $1 billion. Compensatory damages of $7.53 billion remained unaffected. Pennzoil paid Mr. Jamail $335 million and Mr. Kerr $10 million for the victory. After Texaco filed for bankruptcy, Pennzoil agreed to settle the case for $3 billion.