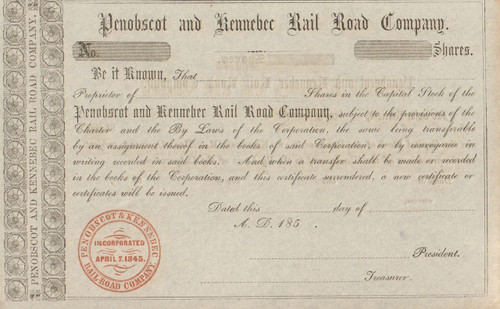 Very old stock from a Maine railroad.  Smaller certificate measuring  4.5" x 7.5".  Unissued  and not cancelled. Circa 1850 based on issued examples. perfect for framing.

In 1845, the year that the P&K was chartered, a law was enacted permitting both the P&K and A&K to consolidate under a new name. The legislation was not acceptable to both companies, thus the A&K was chartered in 1847. The P&K and A&K did not merge until after the contentious section of the previous merger legislation was repealed on September 9, 1862. The following month on October 28, 1862 the A&K and P&K merged to form the Maine Central Railroad.