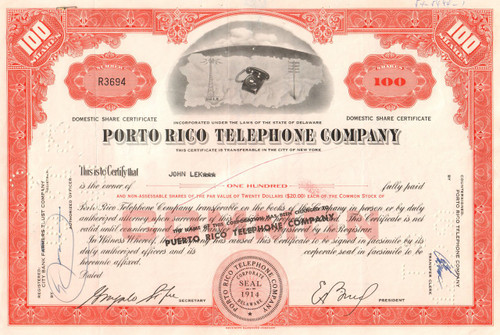 Interesting telephone  collectible stock with a great vignette of the island map with a rotary phone between a radio tower and a telephone pole. Issued and cancelled. Dated 1960. Name changed from Porto Rico to Puerto Rico around 1960.

Originally, Puerto Rico Telephone Company eventually spawned ITT Corporation, which was founded by Sosthenes Behn. The company was a public corporation of the government of Puerto Rico for many years until the majority stakes were acquired by GTE in the mid-1990s. It was a subsidiary of Verizon Communications until it was fully acquired by América Móvil in 2007.