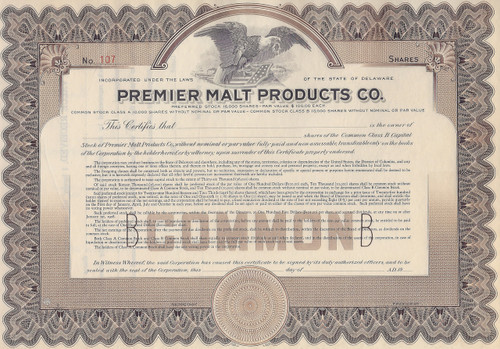 Nice eagle vignette on this home brewer supply company that made and distributed malt.  Unissued, dated 19__. Circa 1920 from company history.

Premier Malt Products was born in the early 1920’s as a response to the beginning of a period of prohibition across America.  During the years of prohibition in the early 20th century the Pabst Brewing Company as well as other family breweries were closed.  It was during this time that the Perlstein brothers bought controlling interest in the Pabst Brewing plants and changed the name to Premier Malt Products, Inc.  The new company began to produce a line of canned malts both with and without hops to sell into the grocery trade across America under the trade name of Blue Ribbon Malt.

While disguised as malt for the housewife to bake cakes and cookies the unwritten and most practiced use for Blue Ribbon Malt was the manufacture of beer by people in their homes.  In 1933 as the era of prohibition came to an end the Pabst family reacquired the breweries with their family name and again began to brew the beer that made Pabst Blue Ribbon one of the most popular beers in America.  The demand for the “Blue Ribbon” home brew products as well as the popularity of malt in commercial baking and cereal manufacturing continued, so the Pabst family continued the manufacturing of these products within their breweries at Milwaukee and later in Peoria, Illinois until 1980 when they closed their Peoria plant.

In 1981 the business Premier Malt Products, Inc. was purchased by a group of private investors and still today manufactures, sells and distributes the same high quality malt extracts that were used in home brewing kits sold during prohibition. These all-natural malt extracts and syrups are used today for manufacturing of healthy foods such as cereals, breads, baked goods and a multitude of fine products for human and animal consumption.  In addition Premier sells a host of other organic sweeteners made from rice, cane sugars and other natural ingredients.  Premier has affiliated production and warehousing facilities in the United States, Canada and Europe that enable it to meet the requirements of it’s vast customer base and deliver it’s products around the globe.