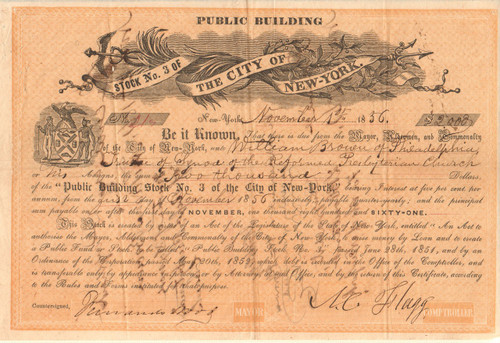 Fernando Wood (June 14, 1812 – February 14, 1881) was an American politician of the Democratic Party and the 73rd and 75th mayor of New York City; he also served as a United States Representative (1841–1843, 1863–1865, and 1867–1881) and as Chairman of the Committee on Ways and Means in both the 45th and 46th Congress (1877–1881). A successful shipping merchant who became Grand Sachem of the political machine known as Tammany Hall, Wood first served in Congress in 1841. In 1854 he was elected Mayor of New York City. Reelected in 1860 after an electoral loss in 1857 by a narrow majority of 3,000 votes, Wood evinced support for the Confederate States of America during the American Civil War, suggesting to the New York City Council that New York City secede from the Union and declare itself a free city in order to continue its profitable cotton trade with the Confederacy. Wood's Democratic machine was concerned with maintaining the revenues (which depended on Southern cotton) that fed the system of patronage.  Following his service as mayor, Wood returned to the United States Congress.

In late 1854 Wood was elected mayor of New York City. The state legislature created the New York Municipal Police in 1845, and Wood continued the efforts of his predecessor to fight the corruption of the force, during his first term as mayor. He was re-elected to a two-year term in 1856, but denied a third successive term in 1858 by a narrow majority of 3,000 votes, even though the New York gang the Dead Rabbits combed the city's cemeteries for names to add to the voter rolls.

In the 1856-57 session, Republicans in control of the New York State Legislature at Albany shortened Wood's second term of office from two years to one, and created a Metropolitan Police Force, with Frederick Tallmadge as superintendent, to replace Wood's corrupt Municipal Police. Talmadge demanded that Wood disband the Municipal Police, but Wood refused, even in the face of a May 1857 decision by the Supreme Court. Superintendent George Washington Matsell, 15 captains and 800 patrolmen of the Municipal Police backed Mayor Wood.

Captain George W. Walling pledged his loyalty to the new Metropolitan Police and was ordered to arrest Mayor Wood. Wood refused to submit and when Captain Walling attempted force, New York City Hall was occupied by 300 Municipal policemen, who promptly tossed Captain Walling into the street. Fifty Metropolitans in frock coats and plug hats then marched on City Hall with night sticks in hand. The Municipals swarmed out and routed the Metropolitans. Fifty-two policemen were injured in the New York City Police Riot.  The Metropolitan Police Board called out the National Guard, and the Seventh Regiment surrounded City Hall. A platoon of infantry with fixed bayonets marched into City Hall and surrounded Mayor Wood who then submitted to arrest. Mayor Wood was charged with inciting to riot, released on nominal bail and returned to his office.

The gangs of New York had a field day. Pedestrians were mugged in broad daylight on Broadway while rival policemen clubbed each other to determine who had the right to interfere. Soon the gangs were looting and plundering without interference, but turned on one another in turf wars, which culminated in the Fourth of July gang battle. The Dead Rabbits and several other Five Points gangs marched into the Bowery to do battle with the Bowery Boys and to loot stores. They attacked a Bowery Boys headquarters with pistols, knives, clubs, iron bars and huge paving blocks, routing the defenders. The Bowery Boys and their allies, the Atlantic Guards, poured into Bayard Street to engage in the most desperate and largest free-for-all in the city's history.

Flagg began as a member of the Bucktails faction of the Democratic-Republican Party, then became a Jacksonian, a Democrat and Barnburner, then joined the Free Soilers in the late 1840s, and finally the nascent Republican Party in the mid-1850s. He was buried at the Green-Wood Cemetery, Brooklyn.