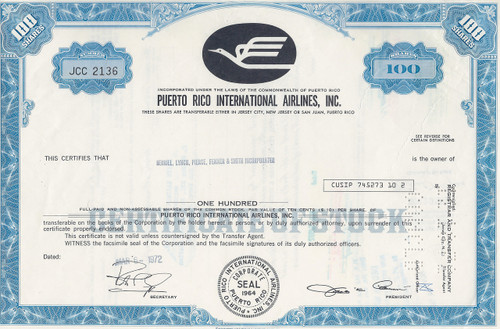 Great Caribbean aviation cert with the company logo as the vignette.  Company never recovered reputation after a number of fatal crashes.

The airline later used de Havilland Heron piston-engined aircraft for its services. The livery reminded the public of Braniff International Airways because of the many different colors used. During the 1970s, expansion saw the airline start cargo freighter services to Opa-locka, FL as well as passenger service to Santo Domingo, the Virgin Islands (U.S. and British), Martinique, Barbados, Puerto Plata, and many other Caribbean destinations, as well as Vieques, Mayagüez, Culebra and Aguadilla on the domestic side.

In the early 1980s Prinair introduced service with larger and more capable Convair 580 turboprop aircraft. This provided the plane spotter at San Juan with another interesting aircraft type to look out for, but did little for the airline other than help increase the earnings from the Virgin Islands routes.

Increased competition for these routes from Aero Virgin Islands and Oceanair, in addition to a measure of distrust from the public that had not forgotten a number of fatal crashes, caused Prinair to cease operations in November, 1984. It was the intention that Prinair would have been one of the launch customers of the CASA CN-235 and at the roll-out of the new aircraft in September 1983 the prototype was actually painted in Prinair colors. However, the demise of Prinair prevented delivery.