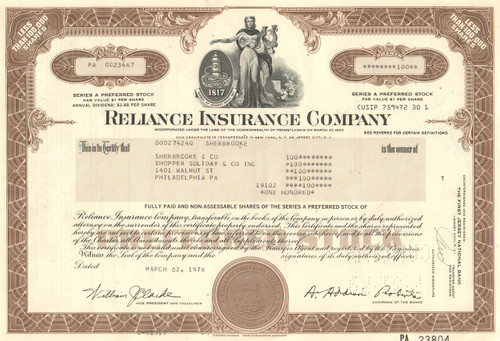 Great vignette reflecting the company history (early fire company) with an allegorical female next to the company logo of a fire hydrant wrapped in a hose. Issued and cancelled, Dated 1978.

Reliance Insurance Company was founded in Philadelphia in 1817 and has undergone numerous corporate makeovers in the intervening years. As of October 3, 2001, the company has been in liquidation.

Reliance was founded in 1817, officially incorporating in 1820, as the Fire Association of Philadelphia, organized by 5 hose and 11 engine fire companies. Upon inception, Reliance became the nation's first successful association of volunteer fire departments, which beforehand had been independent of one another and often engaged in inefficient competition, which at times extended to the destruction of rivals' equipment and the assault of rival firefighters. In addition to underwriting fire insurance, the association served as mediator between its member engine and hose companies to resolve the problems of the past. One lasting symbol of the company adopted at the outset was the fire mark featuring a fireplug with a coiling hose and the initials F.A. on both sides.

The association was granted a charter by the governor of Pennsylvania on March 27, 1820, and wrote 29 policies that year. By 1832 the association wrote 583 policies and by 1844 it had 44 member companies. In 1850 it had a $100,000 surplus, all of which was lost by the Great Fire of Philadelphia that year. The trustees, however, paid all resulting claims, which brought them goodwill and led to further expansion. In 1871 the city of Philadelphia created its own fire department. In response, the trustees chose to continue as a stock company under a new charter, whereby they became solely an insurance company and began writing policies outside of Philadelphia.

In 1958, The Fire Association of Philadelphia officially changed its name to Reliance Insurance Company. The company's growth continued through acquisition and the establishment of subsidiaries. The General Casualty Company of Wisconsin was bought in 1956 and United Pacific Insurance Company in May 1967, providing the company with a solid presence in the Midwest and West respectively. Eureka Insurance Company was started in 1959. Its name was changed to Planet Insurance Company in 1963, and beginning in 1976, wrote Reliance's commercial mass-marketing business.

Mr. Steinberg was born August 1939 in Brooklyn, NY, and received a Bachelor of Science degree in Economics from the Wharton School of Finance at the University of Pennsylvania in 1959. In 1961, at the age 22, he founded Leasco Data Processing Equipment Corporation, a small office data-processing equipment firm that leased IBM computers. The company grew rapidly, expanded its capabilities, and in 1965 went public.  As Leasco grew, Steinberg sought to diversify the company. In 1968 Leasco bought 91% of Reliance Insurance Company and its subsidiaries. A year later in 1969 Steinberg attempted to take over the $9 billion Chemical Bank, then one of the nation's largest financial institutions. The attempt failed and earned Steinberg the enmity of the New York financial community and a reputation for brashness. Fifteen years later Steinberg would make another legendary run at another fabled American institution, The Walt Disney Co. He failed in this bid too, but forced Disney to pay him $60 million in "greenmail" for his shares.

In the early 1970s under the direction of Steinberg, Reliance and its corporate parent Leasco, underwent significant changes in structure and operation. A holding company called Reliance Group Holdings was formed, which through an intermediate holding company owned Reliance and its subsidiaries and sister companies. In 1973 Leasco changed its name to Reliance Group, Inc., to reflect a corporate strategy away from computers services toward financial services and notably insurance-related ones. New insurance subsidiaries were spawned to handle the company's increasing expansion into selected specialty lines, including Commonwealth Land Title Insurance Company (c. 1976), Reliance Insurance Company of New York (1978), Reliance Lloyds (1980). In the early 1980s, the expansion included the incorporation of several new life insurance companies..

Although it was hushed at the time, Saul Steinberg suffered a stroke in 1995. Active control of his financial empire was assumed by his brother, Robert Steinberg. Changes were instituted ostensibly toward making Reliance more focused on insurance, and for a while, it looked as if the company was prospering. Many investors who had long ago grown weary of Saul Steinberg were endorsing the company. RGH stock reached a record high. The company reported in its 1998 annual financial statement, filed in March 1999, a $1.7 billion statutory surplus, its largest in history, and a profit for that year of $585 million. Within less than three years, however, the Commonwealth Court of Pennsylvania would issue a court order placing Reliance into liquidation. The company lost $177 million in net income in 1999 and another $198 million in 2000. In early 2000 Reliance agreed to be acquired by Leucadia National for stock that amounted to only $359 million.