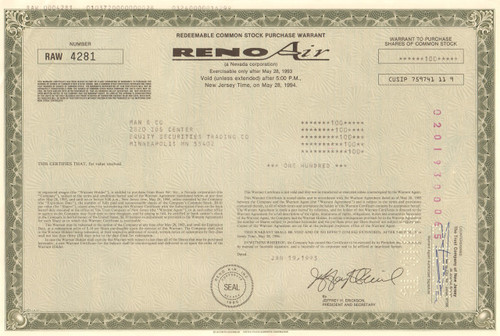 Plain but collectible for aviation interest. Rare common stock purchase warrant certificate from the company.  The vignette is a stylized logo with fancy printing of the company name. Issued and cancelled. Dated 1993

Reno Air was a scheduled passenger airline headquartered in Reno, Nevada, United States. Reno Air provided service from its hubs at Reno/Tahoe International Airport in Reno, Nevada, San Jose International Airport in San Jose, California and Las Vegas International Airport in Las Vegas, Nevada to destinations throughout the western United States to include Alaska. Vancouver, British Columbia in western Canada was also served at one point and limited service was operated to the midwestern U.S. as well. A small stand alone operation was also undertaken at one point in the southeastern U.S. with the service being based in Gulfport, Mississippi. Reno Air was acquired by American Airlines in 1999.

Following the development of its Reno hub, the airline established a second hub at San Jose International Airport in late 1993 by leasing gate space from American Airlines. According to its December 15, 1993 system route map, the airline was operating nonstop flights from San Jose to Burbank, CA, Las Vegas, Los Angeles, Ontario, CA, Phoenix, Portland, OR, Reno and Seattle.

While the airline flew most of its routes on the U.S. West Coast from their three hubs, Reno Air also operated a separate stand alone route system based in Gulfport, Mississippi (GPT). The Mississippi airport, which serves the local gambling casino industry, was linked with nonstop flights to St. Petersburg via St. Petersburg-Clearwater International Airport and Orlando via Sanford International Airport in Florida, and also to Atlanta, Georgia. None of these four airports were linked to the rest of the Reno Air route system.

In February 1999, Reno Air was purchased by American Airlines, and flew its last flight on August 30 of that year. At the time, the purchase was seen as a way to feed American's east-west route network with Reno Air's north-south flights, primarily through San Jose. American initially retained the former Reno Air aircraft and repainted them into a modified version of the American Airlines color scheme, but disposed of the entire Reno Air fleet in 2001 as part of capacity reduction efforts following the 9/11 attacks. By the end of 2001 the original Reno Air route system structure had ceased to exist with American Airlines downgrading Reno to a spoke city rather than a connecting hub.