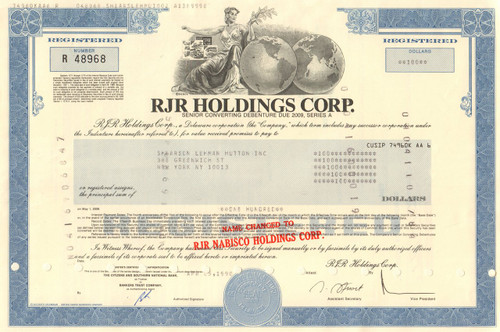 In August 1986, the RJR Nabisco board announced that F. Ross Johnson would replace J. Tylee Wilson as head of the company effective January 1, 1987. Soon after that, Johnson, believing "bucolic" Winston-Salem did not have the right image for a "world-class company", began looking at other possible headquarters cities.  On January 15, 1987, the RJR Nabisco board approved a headquarters move from Winston-Salem to Cobb County, Georgia, north of Atlanta. The move would affect 250 to 300 employees, while Winston-Salem would still have 14,000 people working for the company. RJR Nabisco donated the 519,000-square-foot World Headquarters Building to Wake Forest University but continued to use it until the September 1987 move. Later, RJR Nabisco's Planters-Life Savers Division moved to the former headquarters building.

KKR's offer was welcomed by the board, and, to some observers, it appeared that their elevation of the reset issue as a deal-breaker in KKR's favor was little more than an excuse to reject Johnson's higher payout of $112 per share. Johnson received compensation worth more than $60 million from the buyout, then left in February 1989. In March 1989, Louis V. Gerstner of American Express became the new head of RJR Nabisco. On April 27, 1989, RJR Nabisco announced it would move its headquarters to the New York City area. As a result of the acquisition, RJR Nabisco divested the following divisions:

Nabisco's UK operations (including Smith's and Walkers, Belin of France, and Saiwa of Italy were sold to BSN. Smith's and Walkers were swiftly resold to PepsiCo.
Chun King was sold to Yeo Hiap Seng.
Associated Biscuits International (consisting of 38% of India's Britannia and 40% of Pakistan's English Biscuit Manufacturers) to Britannia Industries.
Fresh Del Monte Produce was sold to Polly Peck.
Del Monte Foods was sold to Merrill Lynch, Citicorp Venture Capitol, and Kikkoman. Del Monte's Asia operations (outside the Philippines) were separately sold to Kikkoman.