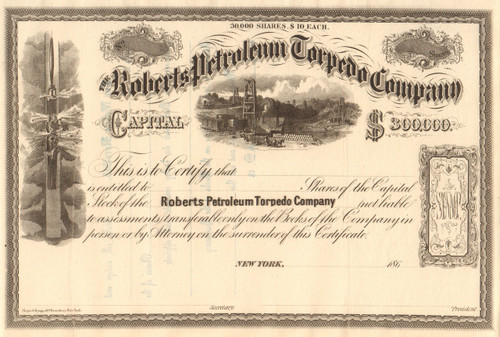 Beautiful oil collectible. Amazing side vignette of a Roberts torpedo exploding in an oil well shaft.  Nice top vignette.  Unissued and not cancelled. Dated 186_ but circa 1865 from issued examples.

A torpedo is an explosive device used, especially in the early days of the petroleum industry, to fracture the surrounding rock at the bottom of an oil well to stimulate the flow of oil and to remove built-up paraffin wax that would restrict the flow. Earlier torpedoes used gunpowder, but the use of nitroglycerin eventually became widespread. The development of hydraulic fracturing rendered torpedoes obsolete, and is the primary fracturing process used today.

Edward A. L. Roberts developed the first torpedo and submitted a patent application in November 1864. Roberts, an American Civil War veteran, came up with the concept of using water to "tamp" the resulting explosion, after watching Confederate artillery rounds explode in a canal at the Battle of Fredericksburg. Roberts developed his first torpedoes in 1865 and 1866. In November 1866 he was granted a patent on his torpedo application, and founded the Roberts Petroleum Torpedo Company. William Reed also developed a torpedo design and went on to found a rival company "for the purpose of infringing and breaking down the Roberts patent.

Roberts charged $100-200 per torpedo as well as a royalty amounting to 1⁄15 of the increased oil production. To avoid paying the exorbitant fees, an owner of a well would often hire men who illegally produced their own torpedoes and used them at night—the practice giving rise to term "moonlighting". Roberts spent $250,000 to protect his patent from the "moonlighters" by hiring the Pinkerton National Detective Agency and filing numerous lawsuits. Roberts' torpedo patents expired in 1879.

Prior to the invention of the oil well torpedo, oil wells produced only small quantities of oil for a short time. They had to be re-drilled due to the build-up of paraffin and clay deposits. It was not until January 28th, 1865 when Col. Edward A. L. Roberts successfully discharged his eight pound torpedo, that oil production could be increased significantly.

The torpedoes, which were lowered into the drilled wells, were filled with gunpowder, and ignited by a weight dropped along a suspension wire onto a percussion cap in the torpedo. In later models, the gunpowder was replaced by nitroglycerin. Oil well production increased over 40 fold as a result of Roberts invention. Modern torpedoes are still used today.

In February, 1865 Col. Edward A. L. Roberts and his brother Walter formed the Roberts Petroleum Torpedo Company. Roberts was granted a patent that gave his company a virtual monopoly on all types of torpedoes used in the oil industry.