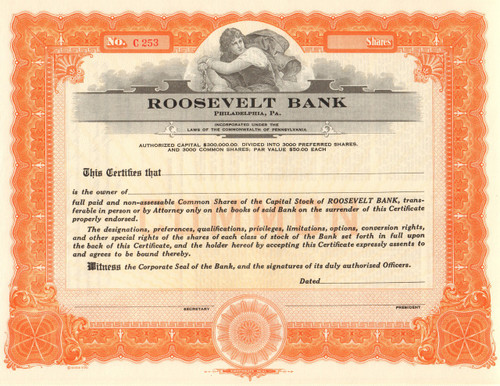 Great bank piece from Philly.  Very nice vignette of a classical female figure in a flowing toga.  Unissued and circa 1919. Very affordable collectible.

Incorporated in 1919, the institution started as the First Federal Bank in 1918 by Sam Green, a Hungarian immigrant, who established an ethnic bank to assist fellow Hungarians in coming to America in the 1910's.  The bank also catered to the Jewish merchants of South Philly.  Samuel A. Green raised $7800 from 181 different people to start the bank. He went throughout his community, offering to match contributions made by these people, until he had enough in deposits to satisfy the regulatory requirements at the time.

The company later became the Roosevelt Bank, located on 21st and Wharton, and survived the Great Depression.  Dan Green, son of Sam, continued the tradition of banking when the First Federal Savings and loan was founded in 1934.  The bank later functioned in South Philadelphia as Fidelity Bank when acquired in 1956.  It was then absorbed by Wells-Fargo in 1988.