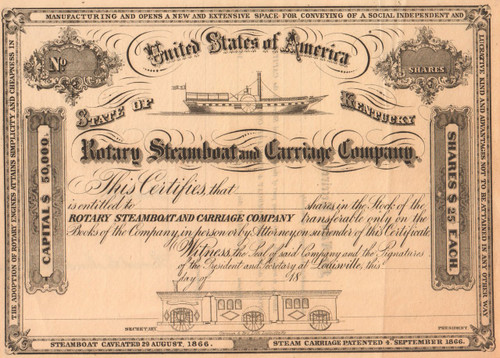 Great transportation collectible with a nice paddle wheeler vignette at the top and steam carriage at the bottom. Unissued and not cancelled. Circa 1866 from company records and issued examples. Dated 18__ on the certificate.

This interesting company was incorporated in Louisville KY in 1866. Founded by German-American Civil War vet, Adolph Reutlinger, who also acted as the primary design engineer.  The steam rotary is believed to an early precursor of a steam turbine to transfer the energy to a rotating motion. The border has the text: "The adoption of rotary engines attains simplicity and cheapness in manufacturing and opens a new and extensive space for conveying of social independent and lucrative kind and advantages not to be attained in any other way."

At the bottom the phrases are contained: "Steamboat caveated on 29 August 1866" and "Steam Carriage patented 4 September 1866".