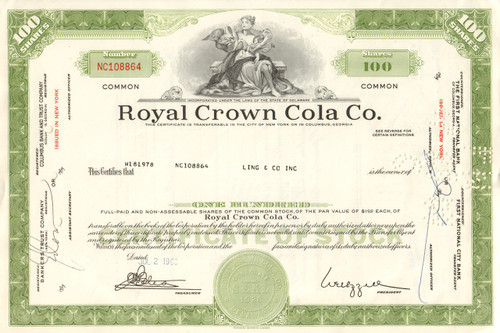 In 1901, the Cole-Hampton-Hatcher Grocery Store was established in Columbus, Georgia. In 1903, the Hatcher family took sole ownership and the name was changed to the Hatcher Grocery Store. The At that same time, the popularity of bottled soft drinks rose rapidly, and grocery store owners wished to maximize their profit. As a grocery wholesaler, Claud A. Hatcher purchased a large volume of Coca-Cola syrup from the local company salesman, Columbus Roberts. Hatcher felt that Hatcher Grocery Co. deserved a special reduced price for the syrup since it purchased such large volumes. Roberts would not budge on the cost, and a bitter conflict between the two erupted. Hatcher told Roberts he would win the battle by never purchasing any more Coca-Cola, and Hatcher determined to develop his own soft drink formula. He started developing products in the basement of the store with a recipe for ginger ale.

In 1958, the company introduced the first diet cola, Diet Rite, and in 1980, a caffeine-free cola, RC 100. In the mid-1990s, RC released Royal Crown Draft Cola, billed as a "premium" cola using pure cane sugar as a sweetener, rather than high fructose corn syrup. Offered only in 12-ounce bottles, sales were disappointing, due largely to the inability of the RC bottling network to get distribution for the product in single-drink channels, and it was quickly discontinued with the exceptions of Australia, New Zealand and France. It is now available only in New Zealand, parts of Australia and Thailand and also Tajikistan. The company also released Cherry RC, a cherry-flavored version of the RC soft drink, to compete with Coca-Cola Cherry and Pepsi Wild Cherry.

In October 2000, Royal Crown was acquired by Cadbury Schweppes plc through its acquisition of Snapple. Royal Crown operations were subsequently folded into Dr Pepper/Seven Up, a former subsidiary of Cadbury Schweppes. In 2001, all international RC-branded businesses were sold to Cott Beverages of Mississauga, Ontario, Canada, and are operated as Royal Crown Cola International, which handles RC Cola products outside the United States. In the US, distribution is handled by Dr Pepper Snapple Group.