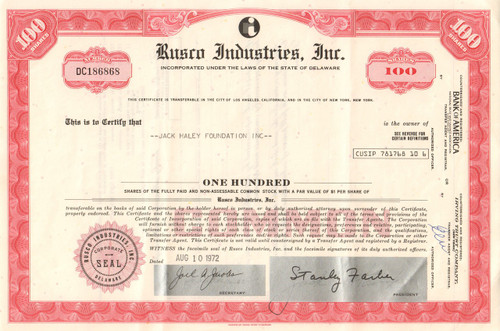 Nice piece with a vignette of the company logo.  Issued and not cancelled, Dated in the 1970's. Interesting history of the CEO and the owner of the stock. Issued to Jack Haley (Tin Man in Wizard of Oz) Foundation.

Rusco Industries said an audit committee's investigation had charged its former president with making a series of nondisclosed insider transactions that cost the company more than $2.5 million.

The committee has asked a Federal court judge in Los Angeles to force the former officer, Jack M. Catain Jr., to repay the money. The company, which manufactures aluminum doors and windows, is currently operating with new management in a Chapter 11 bankruptcy reorganization. It expects to report a profit for the last quarter of 1982 after substantial losses since 1979, and announced it had obtained $500,000 in interim funding that would enable it to withdraw from Chapter 11 proceedings shortly.

Catain lived in Los Angeles and contributed (company funds) to a number of celebrity charities (Eddie Cantor Foundation and the Jack Haley Foundation), often convincing the groups to invest in Rusco. Catain's business career is a blend of street and corporate suite. For years, he was a prominent executive, president of Westwood-based Rusco Industries Inc., a conglomerate with sales of $100 million a year whose stock was traded on the American Stock Exchange.

John Joseph "Jack" Haley (August 10, 1897 – June 6, 1979) was an American vaudevillian, stage, radio, and film actor, light comedian, singer and dancer best known for his portrayal of the Tin Man in the classic 1939 MGM film The Wizard of Oz (1939). Metro-Goldwyn-Mayer hired Haley for the part of the Tin Man in The Wizard of Oz after its contracted song-and-dance comedian Buddy Ebsen suffered an almost fatal allergic reaction. He had unwittingly inhaled some of the aluminum dust that comprised the majority of the components that went into the creation of his silver face makeup.