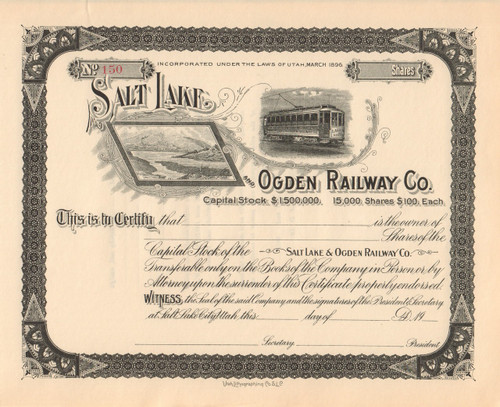 The Bamberger was a good example of an interurban railroad company that was financed, built and managed by local interests. Built as a steam road and later converted to an electric interurban line, the Bamberger was promoted, financed and developed by the Bamberger family of Salt Lake City, who also had interests in coal mines, namely the Weber Coal mine near Coalville, and other mines in Carbon County.

The trains of the Bamberger Railroad first came to Ogden under the banner of a predecessor company, the Salt Lake & Ogden Railway. SL&O was itself an extension of Simon Bamberger's Great Salt Lake & Hot Springs Railway, a suburban line built in 1891 between downtown Salt Lake City and Beck's Hot Springs, north of the city.

Within a year of the completion of the line to Hot Springs in 1891, Bamberger expanded his vision with plans to extend his Great Salt Lake & Hot Springs line to serve his coal mine at Coalville, with a 10-mile branch line to Ogden. In addition to transporting coal from his mine, Bamberger wanted to provide service for the local business traveler, providing more frequent service than either Union Pacific or Rio Grande. Construction of the new extension began north from Beck's Hot Springs, four miles north of Salt Lake City, and the railroad reached Bountiful in 1892, Centerville in 1894 and Farmington in 1895. Financial difficulties followed, and the company was reorganized in October 1896 as the Salt Lake & Ogden Railway.

To provide a destination for travelers while the company was recovering financially, Bamberger purchased a swampy area just north of Farmington, drained it and built the Lagoon Resort, for residents of Salt Lake City who sought recreation outside of the city. (Lagoon remains today as one of the largest resort parks in the West.) The end of track remained at Lagoon from 1896 through 1902, when construction resumed, with Kaysville as the goal.

The plans for serving the Coalville coal mines were soon dropped due to a business slump in 1907, but SL&O construction crews finished the line to Ogden in late July 1908, with passenger service between Salt Lake City and Ogden beginning on August 8, 1908. The depot was located at 31st Street and Lincoln Avenue.

Although the Salt Lake & Ogden Railway was powered by large steam locomotives, it was still known as "the Dummy Line" because of its 1890s start with dummy streetcars, small steam locomotives that were built with bodies that resembled regular electric streetcars.

Throughout its early years, the Salt Lake & Ogden Railway was known as "the Bamberger." In August 1917, the name was changed officially to the Bamberger Electric Railroad, accepting the road's nickname.