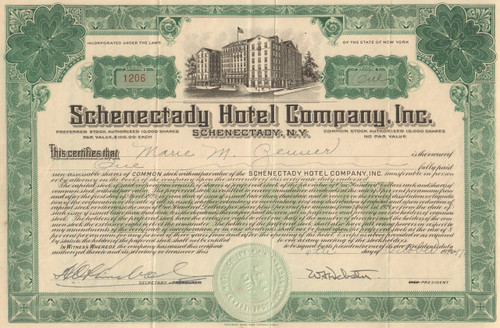 Nice NY collectible with a great vignette of the company's Van Curler hotel.  Issued and not cancelled. Dated 1947.

Incorporated 1923 in New York, the business was created under the auspices of the chamber of commerce to fund hotel building , expansion, and improvements in Schenectady.  Projects included the 1951 expansion of the Van Curler Hotel to build first class rooms with attached bathrooms and construct meeting and dining rooms. The hotel company operated the Van Curler profitably for some years. In 1954 the additions were built to accommodate the increasing demands of business travelers. Every one of the new rooms had AC and a private bath. These rooms rented well, but increasingly guests preferred them to the old section of the hotel, with an overall negative effect on the hotel's occupancy rate.