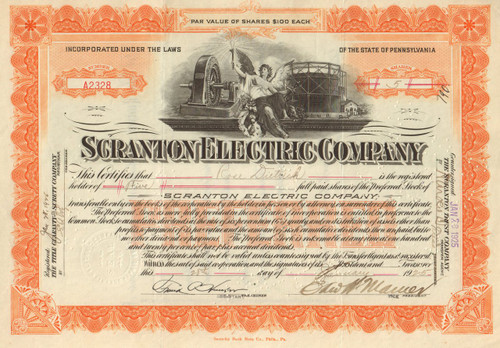 Very nice vignette of a winged angel between a generator and a large fuel tank.  The angel has a glowing light bulb at the end of her staff.  Issued and cancelled. Dated  1920's.

Scranton "took its first step toward earning its reputation as the Electric City" when electric lights were introduced at Dickson Locomotive Works in 1880. Six years later, the nation's first streetcars powered exclusively by electricity began operating in the city. Rev. David Spencer, a local Baptist minister, later proclaimed Scranton the "Electric City." The nation's first successful, continuously operating electrified streetcar (trolley) system was established in the city in 1886, giving it the nickname "The Electric City". In 1896, the city's various streetcar companies were consolidated into the Scranton Railway Company, which ran trolleys until 1954.

The first electric lights in Scranton were arc lamps. They were followed by incandescent bulbs. In the early days of electricity, electric illumination was under the control of a number of companies, with a few of the Midvalley towns operating plants of their own. W.W. Scranton, then head of the Scranton Gas & Water Co., was instrumental in building the first electric power plant along the Lackawanna River. Scranton Select Council passed the Peoples Electric Light and Power Co. ordinance in the summer of 1883, allowing for the regulation of electric power.

Electric street cars were introduced by E.B. Sturges in 1886. His was recognized as the first system in the country to run exclusively on electric power. The streetcars were themselves illuminated with incandescent bulbs. Post cards from the era show Lackawanna Avenue at night, lit by scores of electric bulbs. Their captions refer to the avenue as the Great White Way. Scranton was truly electrified.

In 1907, most of the power plants were consolidated under the name of the Scranton Electric Co.