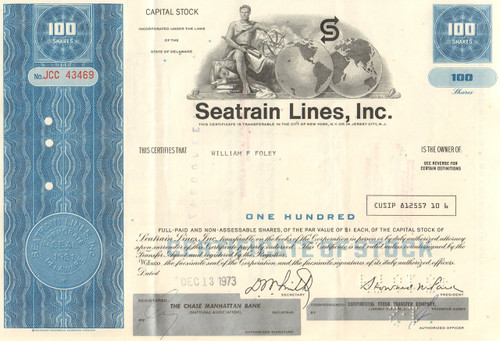 Great collectible RR piece with an ornate vignette with a seated Greek male figure with two hemispheres of the globe and the company logo above.  Issued and cancelled. Dated in the 1970's

Seatrain Lines, formally the Over-Seas Shipping Company, began container shipping in December 1928 by transporting entire loaded rail cars between the United States and Cuba. The specially designed ship Seatrain, built in England, was followed in 1932 by two larger ships built in the United States and in 1939 by two additional ships. By the outbreak of World War II the company was operating five ships that became important in the war effort and basis for the design of fifty new ships for military use.

Seatrain Lines, the operating name for the Over-Seas Shipping Company, began intermodal container shipping by using entire loaded rail cars between ports in the United States and Havana, Cuba, with the first shipment in December 1928 aboard a specially designed ship, Seatrain. This original ship, built at Swan Hunter & Wigham Richardson, Newcastle and later renamed Seatrain New Orleans, was capable of carrying 95 fully loaded rail cars. The company built two larger specialized ships in 1932, Seatrain New York and Seatrain Havana with greater rail car capacity. This service was the forerunner of modern container shipping inaugurated in the late 1950s by other shipping companies. Seatrain was initially located in Hoboken, New Jersey, and owned the Hoboken Manufacturers Railroad that connected its facility to other railroads. In 1939 two more ships were under construction at Sun Shipbuilding and Dry Dock Company, Chester, Pennsylvania, with hulls 191 and 192 becoming Seatrain Texas and Seatrain New Jersey respectively.

In 1944 the five vessels were noted as being unique in the commercial shipping world as described in a decision by the Comptroller General of the United States concerning issues in setting wartime charter rates. The decision noted "these were the only vessels of this type in existence, there was no market for such vessels" and that the "inherent character and design of these vessels which reduces the cost of loading and discharging cargo to a nominal amount per ton, and which by the use of mechanical devices, reduces the time for discharging and reloading to a few hours as compared to a few days" for ordinary ships. Those unique characteristics, though making setting a "market value" difficult, made the ships of particular utility for wartime transport of large, assembled vehicles and machines.

The original 1928 shipment aboard Seatrain caused a labor issue that foretold similar issues later with container ships when Cuban stevedores demanded that they not only unload the rail cars from the ship but unload and repack the rail car contents before turning the cars over to Cuban railways. Seatrain reached agreement with labor but the issue was a precursor to similar labor problems with containers in other ports. In 1951 Seatrain Lines returned to Sun Shipbuilding for two additional railcar carriers, the Seatrain Georgia and Seatrain Louisiana. That year Seatrain also ceased operations to and from Cuba, and renamed its ship Seatrain Havana to Seatrain Savannah to reflect the suspension of service. In 1953 Seatrain sold its operating authority to trade between the US and Cuba to the West India Fruit and Steamship Company, along with its first ship, the Seatrain New Orleans, which was renamed Sea Level.

In 1958 Seatrain Lines introduced its Seamobile intermodal cargo container service, carrying the containers on its railcar-carrying ships between Seatrain’s Edgewater terminal on the New Jersey side of New York harbor, and Texas City (Houston). In 1959, Sea-Land Service founder Malcom McLean, a pioneer and leader in intermodal marine-rail-highway containerization, attempted to buy the competing Seatrain Lines, but his offer was rejected. In 1963 Seatrain tried to expand its ship/rail operations with a New York to Puerto Rico run, but this service was severely hampered by the inadequacies of rail transport in Puerto Rico. In addition, Sea-Land Service had introduced containerized service to Puerto Rico in 1958. To compete, Seatrain Lines discontinued the transport of rail cars to Puerto Rico and utilized containers instead.

Transeastern Associates, a firm created in the early 1950s by Joseph Kahn and Howard Pack, bought Seatrain Lines in 1965 for $8.5 million. At the time of their purchase, Seatrain operated between New York and ports in Savannah, Georgia, Texas City, Texas, New Orleans and Puerto Rico. Transeastern and its subsidiary Hudson Waterways Corp. were folded into Seatrain in September 1966.

In 1966 Seatrain began a program to reinvent itself by replacing its aging and obsolete railcar-carrying ships with a fleet of multi-purpose heavy sea-lift ships and cellular container ships. All would be heavily rebuilt from surplus World War II era type T2 tankers and C4 transports obtained by Hudson Waterways through the Maritime Administration (MARAD) ship exchange program. The multi-purpose ships were mainly intended for charter to the Military Sea Transportation Service (MSTS) in support of overseas U.S. military operations, particularly the war in Vietnam, while the container ships would allow Seatrain to containerize its commercial cargo operations.

Seatrain Puerto Rico was the first of the heavy sea-lift ships completed in 1966, followed by Seatrain Carolina, Seatrain Florida, Seatrain Maryland, Seatrain Maine, Seatrain Washington and Seatrain Ohio in 1967. The ships were equipped with two cranes for self loading and unloading and could carry general bulk and palletized cargo, intermodal containers, and vehicles. The lower and main decks also had embedded rails to allow for carrying railcars, although there is no evidence that any of the ships were ever employed as railcar carriers per se, except for transporting some narrow-gauge rolling stock to Vietnam,[19] in which case the standard-gauge rails could not be used. Elevated spar decks provided additional carrying space for vehicles, aircraft and containers.

In 1971 Seatrain placed two new high-speed gas turbine-powered container ships in service on its transatlantic route, the German-built Euroliner and Eurofreighter. They were joined in 1972 by the Asialiner and Asiafreighter in anticipation of expanding its transpacific service. On August 17 of that year Seatrain, in partnership with the Penn Central and Atchison, Topeka and Santa Fe railroads, also established a pioneering coast-to-coast land bridge rail container service between its U.S. East and West coast terminals, cutting up to 10 days off the transit time between Europe and the U.S. West coast and Asia.

In 1974 Matson, Inc. took over Seatrain's West Coast-Hawaii service, leasing the Transoneida, Transchamplain and Transontario to handle the traffic. In 1975 Navieras de Puerto Rico, also known as the Puerto Rico Maritime Shipping Authority, took over Seatrain's operations to and in Puerto Rico, along with the ships Transhawaii, Transidaho and Transoregon, which became Navieras' Aguadilla, Carolina, and Mayaguez (often confused with the Sea-Land Service ship of the same name involved in the Mayaguez incident). These two changes left Seatrain to concentrate on its international transatlantic and transpacific operations and replace its original converted container ships, mainly with a fleet of chartered ships, plus the new-builds Seatrain Independence, Seatrain Bennington, Seatrain Chesapeake, Seatrain Oriskany, Seatrain Saratoga, and Seatrain Yorktown.

Struggling to remain solvent in the wake of its disastrous excursion into shipbuilding, a dramatic increase in fuel costs following the Organization of the Petroleum Exporting Countries (OPEC) price increases of the mid-1970s, and the rapid replacement and expansion of its fleet in the late 1970s, and a deepening business downturn, in 1980 Seatrain began divesting its chartered tonnage and cut its rates in the North Atlantic lane to attract more traffic. This set off a rate war which only added to the losses. In August Seatrain sold its transatlantic operations and the ships Seatrain Bennington and Seatrain Saratoga to Trans Freight Lines, and then concentrated on restructuring its Pacific operations under the name Seatrain Pacific Service, or Seapac.