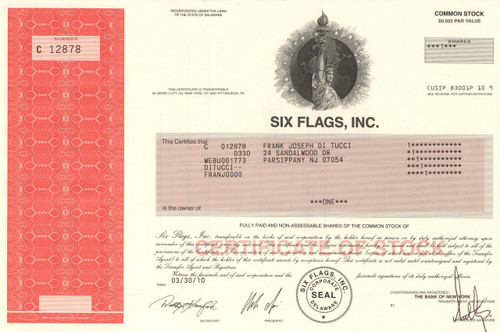 Cool entertainment collectible.  Very nice vignette of the Statue of Liberty in front of a globe of the earth. Issued and not cancelled. Dated 2010.

The name refers to the flags of the six different nations that have governed Texas: Spain, France, Mexico, the Republic of Texas, the United States of America, and the Confederate States of America. The original park was split into separate regions, such as the Spain and Mexico section which featured Spanish-themed rides, attractions, and buildings.

The Six Flags chain originated in 1959 with the creation of The Great Southwest Corporation by Angus G. Wynne and other investors. Construction of "Six Flags Over Texas" started in 1960, and the park was opened the next year for a short (45-day) season. The first park initially featured a Native American village, a gondola ride, a railroad, some Wild West shows, a stagecoach ride, and "Skull Island", a pirate-themed adventure attraction. There was also an excursion, inspired by the historical La Salle Expeditions in the late 1600s, called "LaSalle's River Adventure", aboard French riverboats through a wilderness full of animated puppets. Over time, all of those attractions, except for the railroad, would be replaced by others, such as roller coasters, swing rides, log flumes, and shoot-the-chute rides, as well as an observation tower.

The original park, in Arlington (between Dallas and Fort Worth) was sold in 1966 to a subsidiary of the Pennsylvania Railroad, which was actively pursuing non-railroad investments in an effort to diversify its sources of income. With the new owners came a more abundant supply of capital for geographic expansion and park additions. Six Flags opened Six Flags Over Georgia in 1967 and Six Flags Over Mid-America in 1971, which would, along with Six Flags Over Texas, be the only three parks that would be constructed by the company. The company continued to grow by acquiring independent parks. Six Flags purchased AstroWorld in Houston, Texas in 1975, Great Adventure in Jackson, New Jersey in 1977 and Magic Mountain in Valencia, California in 1979. These purchases were followed by Penn Central selling assets to Bally Manufacturing in 1982. In 1984, the Great America theme park in Gurnee, Illinois was acquired from the Marriott hotel chain.

In 2001, Six Flags acquired the former SeaWorld Ohio from Anheuser-Busch, merged it with the adjacent Six Flags Ohio and re-branded the combined park as Six Flags Worlds of Adventure. The park was positioned to compete against northern Ohio's Cedar Point.

On June 13 2009, the firm filed for Chapter 11 bankruptcy protection, but issued a statement that the parks would continue to operate normally while the company restructured.[20] On August 21, 2009, Six Flags' Chapter 11 restructuring plan was announced in which lenders would control 92% of the company in exchange for cancelling $1.13 billion in debt.

One component of the restructuring was negotiating a new lease agreement with the Kentucky State Fair Board, which owned much of the land and attractions for Six Flags Kentucky Kingdom. Six Flags had asked to forgo rent payments for the remaining nine years of its current lease agreement in exchange for profit-sharing from the park's operations. When it appeared that the offer had been rejected, Six Flags announced in February 2010 that it would not re-open the park.

On April 28, 2010, the company's bondholders reached an agreement on a reorganization plan. Junior note holders, including hedge funds Stark Investments and Pentwater Capital Management, assumed control of the company, while senior note holders were paid in cash. Despite objections from some parties who stood to gain nothing, the bankruptcy judge approved the plan on April 30, 2010. As part of the settlement, Chairman of the Board Dan Snyder was removed, while Chief Executive Officer Mark Shapiro briefly remained in his post. Six Flags officially emerged from bankruptcy protection as Six Flags Entertainment Corp. on May 3, 2010, and announced plans to issue new stock on the New York Stock Exchange.