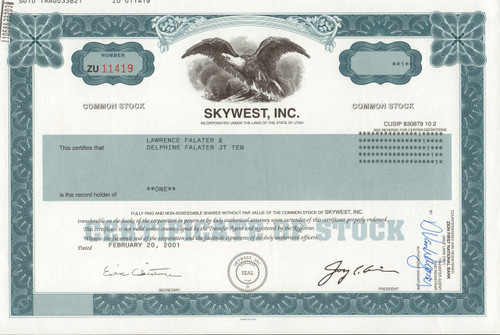 SkyWest Airlines is a North American airline owned by SkyWest, Inc. and headquartered in St. George, Utah, USA. Financially speaking and according to the Airlines for America definitions, SkyWest is a North American major airline. SkyWest however, operates on a regional airline level and is a member of the Regional Airline Association. SkyWest Airlines flies to 180 cities, in 43 states; Washington, D.C.; seven Canadian provinces and five cities in Mexico and the Bahamas.

As of June 2015, SkyWest employs 10,329 people throughout North America. The airline averages 1,727 departures a day, with 907 operating as United Express, 572 operating as Delta Connection, 95 operating as US Airways Express, 110 operating as American Eagle and 43 operating as Alaska Airlines. In total, SkyWest carried 27.9 million passengers in 2014. The current Chairman and CEO of SkyWest, Inc. is Jerry Atkin, with Michael Thompson as Chief Operating Officer of SkyWest Airlines.

Frustrated by the limited extent of existing air service, Ralph Atkin, a St. George, Utah lawyer, purchased Dixie Airlines to shuttle businessmen to Salt Lake City in 1972. After early struggles, SkyWest began steady expansion across the eastern U.S.. It became the eleventh largest regional carrier in 1984 when it acquired Sun Aire Lines of Palm Springs, California, and had its initial public offering in 1986.

Following the acquisition and merger of Western by Delta Air Lines in 1986, SkyWest then became a Delta Connection air carrier with code share service being flown on behalf of Delta. In 1995, SkyWest began operating flights for Continental Airlines out of LAX. The relationship was discontinued two years later when SkyWest began flying for United Airlines. On August 15, 2005, Delta sold Atlantic Southeast Airlines to the newly incorporated SkyWest, Inc. for $425 million in cash.

On August 4, 2010, SkyWest, Inc. announced that it planned to acquire ExpressJet Airlines and merge it with SkyWest subsidiary Atlantic Southeast Airlines. The purchase aligned the largest commuter operations of United Airlines and Continental Airlines, who were in a merger process, and was approved on September 13, 2010.