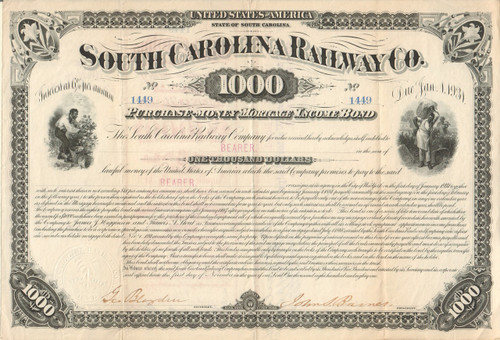 Awesome older SC railroad piece.  Left and right vignettes of cotton field workers.  Issued and not cancelled bearer bond. Measures approximately 9" by 12.5". Folds as shown in the picture. Dated 1881 in the certificate text.

After entering receivership in 1889 which lasted for five years under the aggressive management of Daniel H. Chamberlain, former Reconstruction governor of the state, the South Carolina Railway Company was reorganized as South Carolina and Georgia Railroad Company, under the general laws of South Carolina, May 12, 1894, amended by act of December 24, 1894.