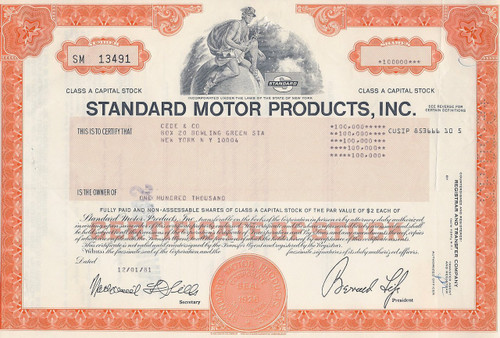 Nice, affordable stock cert with an intersting vignette of Mercury seated on a globe next to the company logo.  Dates from the 1970's through the 1990's on available pieces. Heavy pen cancellations and priced accordingly.

Standard Motor Products, Inc. (NYSE: SMP) is a manufacturer and distributor of automotive parts in the automotive aftermarket industry. The company was founded in 1919 as a partnership by Elias Fife and Ralph Van Allen and incorporated by Fife in 1926. It is headquartered in Long Island City, New York, and trades on the New York Stock Exchange.

Standard Motor Products was founded in Manhattan in 1919 as a partnership between Elias Fife, a Jewish immigrant from Lithuania, and Ralph Van Allen. Originally the company specialized in ignition and electrical parts. In 1920 Van Allen opened a Standard Motor Products branch in Seattle. In 1921 the company moved to the Long Island City section of Queens. The partnership dissolved in 1925 and in 1926 the company was incorporated with Fife as the sole proprietor. Van Allen operated a separate company in Los Angeles under the same name and logo until selling it to Fife in 1936.

The Blue Streak line of premium impact parts was introduced in the 1930s. In 1947 Standard acquired Hygrade Products Co. The product line was expanded to include speedometer cables, carburetor repair parts, shock-absorber parts, and fuel pumps. In 1950 Standard introduced the Hygrade System, simplified carburetor kits for tune-ups and light overhauls.[

Standard Motor Products had its Initial public offering in 1960 and was listed on the New York Stock Exchange (NYSE) in 1977. In 1963 it entered the wholesale parts market with a new subsidiary, Marathon Parts. Beginning in the late 1960s under Lawrence "Larry" Sills, Fife's grandson, Standard acquired several rival businesses. In July 1997 it exchanged its brake business for Cooper Industries' temperature control business. The company funded acquisitions by taking out loans and selling stock; as of 2011 less than 10% remains family-owned. In the financial crisis of the late 2000s, the company had to retrench and sold its headquarters building.  In January 2014, the company acquired the assets of Pensacola Fuel Injection.[9]