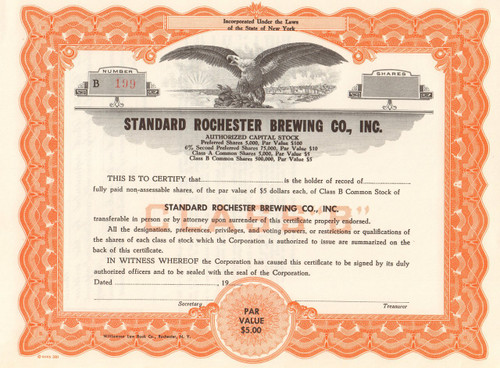 Nice brewing collectible with a wonderful vignette of a perched eagle with wings spread in front of a coastal city scene.  Unissued and not cancelled. Circa 1956 from company records.

The brewery reopened again after Prohibition and their primary brand was Old Topper.  Like many upstate New York breweries, Rochester originally specialized in ale, but soon added lager to the brewery's output. Around 1950, the brewery changed its packaging designs, changing their "Old Topper" designation to "Golden Old Topper" and updating the typeface from the Old English motif to a more modern look.

After consolidation, the packaging designs underwent some significant updating and made consistent across brands.  The Old Topper brand was shortened to simply "Topper" and its text style changed to a more modern look.

In the early 1960s, as part of an effort to capture more market share, Standard-Rochester purchased and produced the brands of the Haberle-Congress Brewery of Syracuse.  They also introduced a new line of beverages named "Jaguar", which included a malt liquor.  Finally, the marketed a low-calorie beer clled "Dia-Beer". which they had licensed from a German brewer.  All of these efforts met with limited success and, by 1970, Standard-Rochester closed its doors for good, another casualty of the nationwide consolidation of the brewing industry into a few major national brands.

The Topper and Standard Dry brands resurfaced a few years later as brands of the Eastern Brewing Company of Hammonton, New Jersey.  Eastern Brewing had a business model that focused on buying the brands of small regional breweries that had closed and producing beer under those labels to sell in specific markets.  Eastern Brewing produced beer and ale under the Topper and Standard Dry labels for a few years and also produced a non-alcoholic malt tonic under the Topper label that was distributed in Middle-Eastern countries like Saudi Arabia.