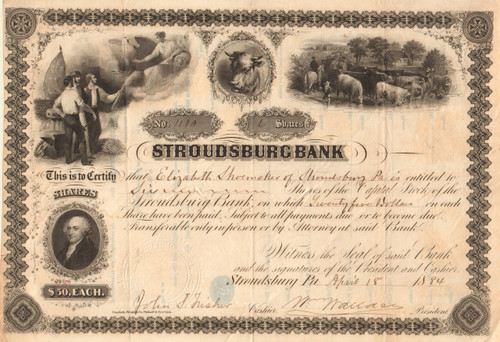 Very rare. One of the most stunning stock certificates that we have seem Covered in amazing engraved vignettes.  This piece is also in greatconditions for this issue.  Issued and not cancelled. Dated 1884.

Incorporated in 1857, the bank served the town of Stroudsburg, PA.  The act organizing the Stroudsburg Bank was passed on the 9th of January, 1857, and its charter obtained on the 23d of June of the same year.

Its officers under the charter were Depue S. Miller, president; James H. Stroud, cashier; and its board of directors, Jay Gould, Stephen Kistler, Henry M. La Bar, Thomas W. Rhodes, Charles D. Brodhead, John Boys, Stroud J. Hollinshead, David D. Walton, Michael Shoemaker, Charles Saylor, Morris Evans, William S. White and Depue S. Miller. The presidents in succession since that time have been S. S. Dreher, Stogdell Stokes, William Wallace and Thomas M. Mcllhany. The cashiers who, in succession, followed Mr. Stroud are Jeremy Mackey and John S. Fisher. The charter of the bank having expired iii 1872, it was, on the 6th of March of that year, rechartered. The amount of discounts of the bank average $275,000, and the deposits $350,000.