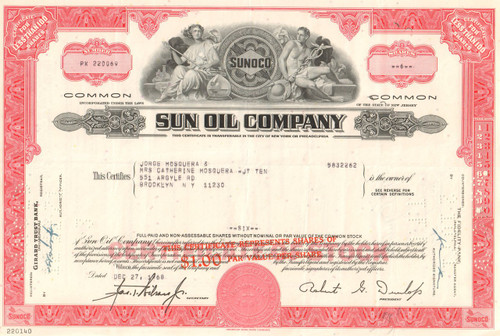 Very nice oil collectible with this stock cert.  The vignette has two seated Greek figures flanking the Sunoco logo.  Issued and cancelled. Dated 1970's. Available in the uncommon red, olive, or the set of 2 colors.

Sunoco Inc. is an American petroleum and petrochemical manufacturer headquartered in Philadelphia, Pennsylvania, United States, formerly known as Sun Company Inc. (1886–1920 and 1976–1998) and Sun Oil Co. (1920–1976). Sunoco is one of the largest gasoline distribution companies in the United States, with Sunoco brand gasoline being sold in over 4,700 outlets spanning 26 states,[3] just over a third hosting convenience stores. Since 2012, Sunoco has been a wholly owned subsidiary of Energy Transfer Partners, based in Dallas.

Sunoco is a Fortune 100 Company. In 2011 it was ranked as the third largest company by revenue in Pennsylvania, after AmerisourceBergen and Comcast. Its headquarters are located in the BNY Mellon Center in Center City Philadelphia. In 2011, the company decided to exit the oil refinery business. In Canada, Sunoco was formerly operated by Suncor Energy, a separate Canadian entity. In 2010, all Canadian Sunoco outlets were converted to Petro-Canada outlets.

The integrated oil company now known as Sunoco began as The Peoples Natural Gas Company in Pittsburgh, Pennsylvania. In 1886, its partners – Joseph Newton Pew, Philip Pisano and Edward O. Emerson – decided to expand their gas business with a stake in the new oil discoveries in Ohio and Pennsylvania. Four years later, the growing enterprise became the Sun Oil Company of Ohio. Sun Oil diversified quickly, active in production and distribution of oil as well as processing and marketing refined products. By 1901, the company was incorporated in New Jersey as Sun Company and turned its interest to the new Spindletop field in Texas. Pew's sons, J. Howard Pew and Joseph N. Pew, Jr. would take over the company after their father's death.

The name changed back to Sun Oil Company in 1922 and, in 1925, Sun became a publicly traded company on the New York Stock Exchange. Sunoco ranked 39th among United States corporations in the value of World War II production contracts. Sun expanded internationally following the war. Its first Canadian refinery was built in 1953 in Sarnia, Ontario, home to a burgeoning new petrochemical industry. Sun established a facility at Venezuela's Lake Maracaibo in 1957, which produced over a billion barrels before the operation was nationalized in 1975.

In 1968, Sun Oil merged with Tulsa, Oklahoma-based Sunray DX Oil Company, which refined and marketed gasoline under the DX brand in several Midwestern states, and included several refineries including one in Tulsa that was operated by Sun until its sale was completed in June 2009 to Holly Corporation of Dallas, Texas. This move expanded Sun's marketing area into the mid-continent region.

Sun Oil continued marketing its petroleum products under both the Sunoco and DX brands through the 1970s and into the 1980s. In the late 1980s, Sun began rebranding DX stations in the Midwest to the Sunoco brand and even introduced the high-octane Sunoco ULTRA 94 gasoline to stations in that region, but by the early 1990s, they pulled out of virtually all areas in the southeastern U.S. and west of the Mississippi, resulting in the closing and rebranding of service stations and jobbers to other brands in those areas, notably Sinclair in Oklahoma.

With increased diversification, Sun Oil Company was renamed Sun Company in 1976. In 1980, Sun acquired the U.S. oil and gas properties of Texas Pacific Oil Company, Inc., a subsidiary of The Seagram Company, Ltd., for US$2.3 billion—the second largest acquisition in U.S. history to that date.

Through the 1980s, Sun developed oil interests in the North Sea and offshore China and expanded its holdings in both oil and coal with additional U.S. business acquisitions. In 1983, consumers saw the arrival of Sunoco ULTRA 94, the market's highest octane unleaded gasoline. Then in 1988, Sun undertook a major restructuring to segregate its domestic oil and gas exploration and production business and the focus the company on its refining and marketing business. This led to the acquisition of Atlantic Refining and Marketing, including its Philadelphia refinery which was later merged with the former Gulf Oil refinery next door that Sunoco acquired from Chevron.

By the 1990s, Sun had departed the international exploration business and was fully dedicated to its branded products and services. In 1994 Sunoco acquired the Philadelphia Chevron Oil refinery consolidating operations with its own adjacent which it had acquired with Atlantic. Sun sold its remaining interest in Canada's Suncor Energy in 1995, but markets product from two refineries – one in Toledo, Ohio, and the other Sarnia, Ontario – in joint ventures. In 1998, Sun Company, Inc. became Sunoco, Inc. In 2011 the Toledo facility was sold to PBF Energy.

In 2003, the Speedway Super America chain of gas stations and convenience stores exited the Southeastern United States and sold most of their operations to Sunoco. Shortly prior to this, Sunoco acquired many service stations from Coastal Petroleum, especially its stations in Florida. This has led to the reintroduction of the Sunoco brand to areas it pulled out of ten years earlier. Coincidentally, Speedway would later re-enter the Southeast with its purchase of Hess Corporation's downstream operations in 2014, mirroring that of Sunoco's return to the Southeast.

After ConocoPhillips abandoned the marketing of the Mobil brand name in the Washington, DC, area, Sunoco purchased these rights, and has since been converting Maryland and Virginia Mobil stations to the Sunoco brand, bringing the A-Plus convenience store with them – prior to this, these stations had convenience stores under the Circle K or On the Run brands. In September 2009, Sunoco announced the sale of its retail heating oil and propane distribution business to Superior Plus Corp for $82.5 million in cash.

In December 2010, Sunoco sold its refinery in Toledo, Ohio to PBF Energy for US$400 million. Effective 6 September 2011, Sunoco announced that it would exit the crude oil refining business and seek to sell its Philadelphia and Marcus Hook refineries by mid-2012. The company has said that its cost for exiting the refining business could be as high as US$2.7 billion. According to one report, the company had lost some US$800 million on refining operations since 2009. On December 1, 2011, Sunoco announced it would accelerate closure of the Marcus Hook facility, with a target completion in 90 days. The Marcus Hook facility, founded in 1902 and covering 781 acres, was dedicated exclusively to the processing of light sweet crude oil; this processing focus combined with volatility in crude oil prices are considered contributing factors to both this refinery's closure and Sunoco's exit from the refinery business.