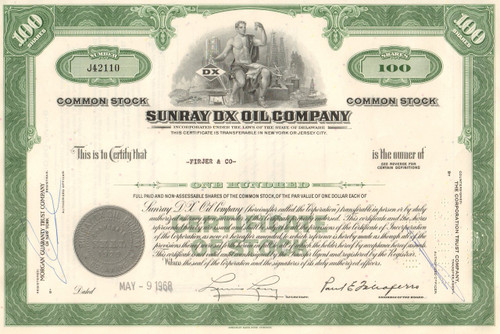 Great  collectible oil stock with a nice vignette of a seated Greek male figure in front of a background of oil wells and refinery. Issued and cancelled. Dated 1960's. Affordable piece of oil and race car history.

The company’s stations began selling gasoline at stations under the Diamond name at some point in the early to mid- 1920s. The stations sold motor oil, kerosene, Diamond gasoline, and an anti-knock version known as Nevr-Nox. This antiknock compound must have been something other than Ethyl at the beginning, because it was touted as being “non-poisonous” on some versions of signs and globes from the 1920s through 1933.

In 1933, “D-X” gasoline was introduced. It is theorized that this name was in reference to “Diamond – X,” suggesting an “X-factor” or unknown substance in the gasoline that made it superior to others. The D-X name became more prominent, being applied to more than just gasoline. Eventually, by the end of WWII, stations were rebranded from “Diamond” to simply “D-X.”

This merger resulted in two new companies. The Sunray Mid-Continent Oil Co. was the production-oriented entity, and the D-X Sunray Oil Co. was geared primarily towards marketing and distribution. Stations continued to operate under the D-X name (changed to DX in or about 1957). Sunray stations added the D-X logo to the bottom of their logos at the time of the merger, but by 1962, all were rebranded to DX.

Also in 1962, a name change took place for DX Sunray. The positions of the names were reversed, yielding the Sunray DX Oil Company.

1968 brought about the end of Sunray DX, as a merger with the Sun Oil Company (Sunoco) resulted in its dissolution. The DX stations located in Sunoco marketing areas were rebranded, but the stations outside of these areas remained DX until after 1980. It was in this year that Sun began to rebrand all of the DX stations gradually, the last of which disappeared in the mid-1990s.

In 1955, significant changes took place in the company. Because Mid-Continent was mainly a holding and marketing operation, it proved beneficial for them to merge with a heavily production-oriented company. In this case, that company was Sunray Oil.

By 1965 Sunray DX was the sixth largest oil company in the world. It was also the oldest, with roots going all the way back to 1858. But in spite of its size and age the company was having some difficulty keeping pace with the rapidly changing socioeconomic landscape of the 1960s. In 1968, Sun Oil merged with Tulsa, Oklahoma-based Sunray DX Oil Company, which refined and marketed gasoline under the DX brand in several Midwestern states, and included several refineries including one in Tulsa that was operated by Sun until its sale was completed in June 2009 to Holly Corporation of Dallas, Texas. This move expanded Sun's marketing area into the mid-continent region.

Yenko Corvettes raced under the DX banner and for retail product development. In the thirty six states where their products were sold Sunray’s line of Supersport lubricants and high octane fuel was the most visible result of this ongoing field testing and development work. Some of the more notable names who drove the DX Corvette in 1968 include Peter Revson, Pedro Rodriguez, Bob Bondurant, Dick Guldstrand, and Jerry Grant. The most significant outing for the car in that year came at the Daytona 24 Hour race, where Grant and Morgan co-drove to a first in class, tenth overall finish. The car ran perfectly at Daytona for the entire 24 hours and, assisted by special differential gearing provided by Chevrolet Engineering and centrifugal forces generated by the superspeedway’s severe banking, achieved speeds in excess of 194 mph.

Remembering the DX L88’s impressive durability and incredible speed potential Morgan recently had this to say; “That was one of the most reliable race cars I’ve ever driven. It was a fine car that did everything well. It handled, it stopped, and it went like hell! We hit 194 mph at Daytona and ran the entire 24 hours without a single mechanical problem. The engineers really did their homework and it showed out on the track.” Plans were put in place to expand the DX Motorsports program in 1969, including an entry at Le Mans, but it never came to be.