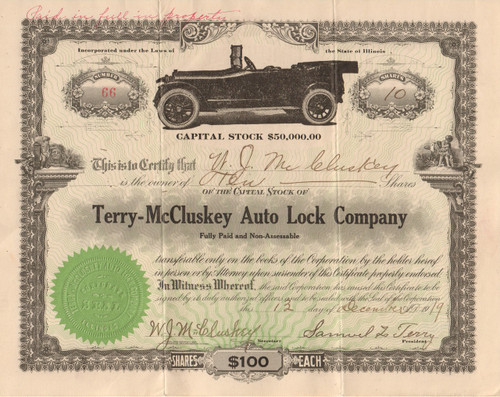 Very early and rare stock certificate with a fantastic vignette of an early roadster automobile. Dated Dec 12, 1919. Signed by Samuel Terry as president and WJ McCluskey as secretary. Issued and not cancelled. Incorporated in Illinois.

Samuel Terry and William McCluskey patented, manufactured, and sold anti-theft lock mechanisms for earlier automobiles from 1919 until the late 1920's. Their biggest patent (1926) locked steering gear against unauthorized use. The company operated a factory in Chicago IL at 1821 Berteau Avenue but was headquartered on West 43rd Street. Unfortunately, the company closed due to competition from other lock makers and the auto brands use of their own parts.