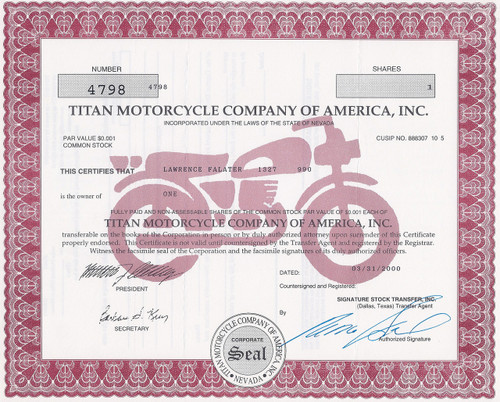 Very nice under print of a motorcycle on this unsuccessful company. Issued and not cancelled. Dated 2000.

Titan Motorcycle Company is an American motorcycle manufacturer that was founded in 1995 in Phoenix, Arizona and was the first custom motorcycle company to produce in volume. At the time there was a shortage of brand new Harley-Davidsons, and those who were lucky enough to get a new one would quite often disassemble them and add lots of chrome custom parts. There was a market for fast available mild customized bikes. These motorcycles had a registered name and a valid VIN and were easy to finance but at first not easy to insure due to bank uncertainty with the manufacturing processes. This carried over to the Bl-Book listing were it caused incorrect prices on these motorcycles and made it difficult for sellers to get the correct price. The few specialty motorcycles Like the Titan Phoenix TRM Custom where only 25 were built, one at a time each bike built or put together by one person. Titan owners went public on the NASDAQ in 1997.

By 2001, the management had failed, then dealer and customer support failed and Titan filed for bankruptcy. Andrew Donald Proudfoot owned the largest Titan dealership in Florida and was stuck with a large inventory of Titan motorcycles. He also went to Titan’s headquarters and bought the company in July 2001. Titan number 2 was born but went under due to the Company owing more to vendors then had the capital to pay for their services. The new competition from companies like Big Dog, American IronHorse and many other Harley clones companies, and also because of a declining American motorcycle market since the beginning of 2007.