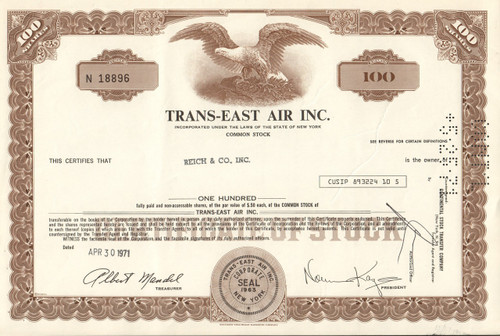 In one of his biggest promotional coups, Norman Kaye took out a full-page ad in The New York Times headlined: “Can Bangor, Maine, answer New York’s air congestion problem?” Not only did Kaye explain why that was the case, he also flew 100 major airline executives to Bangor International Airport to inspect the airport. The tactic garnered national attention and prompted a closer look through a Newsweek magazine article in 1970.

Trans East Airlines took over the refueling and general aviation business at Bangor International Airport after the military abandoned Dow Air Force Base in 1968. Though Trans East Airlines still had financial commitments in New Hampshire, it quickly established Bangor, Maine as a key Atlantic Coast airport for supplemental air carriers. Scheduled air carriers used Bangor International Airport as an alternate stop for refueling and other services.

In spring 1968, there was a need for mini-stewardesses, also known as mini-stews, for Trans East Airlines, as the cabin height of the Twin Otter aircraft was limited. Stewardesses had to be five feet tall or shorter to work on the specially designed short-haul aircraft.