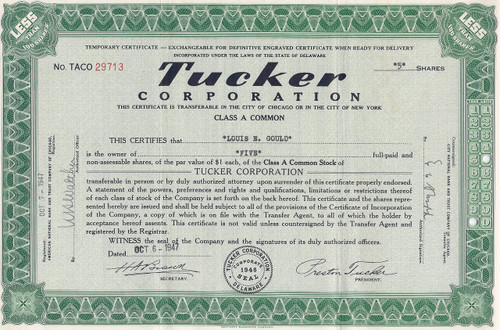 Rare printed signature of automotive innovator Preston Tucker as president. Famous movie about this car maker who ended up making only 50 vehicles.

The Tucker automobile had many advanced, innovative features, from its fastback shape to its swiveling center headlight and independent four-wheel suspension. Enhanced passenger safety was one of the Tucker's principal features. It had a pop-out windshield, padded dashboard, and a place where the front-seat passenger could crouch in the event of a collision.

Preston Tucker, an automotive engineer who helped to design Miller racing cars before World War II, almost realized his ambition of producing a "completely new" passenger automobile after the war. He and his business associates leased a former Dodge aircraft plant in Chicago for this purpose. Fifty-one nearly identical Tucker automobiles, designed by Tucker, were built in 1948 before the Tucker Corporation became embroiled in fraud allegations. Shortly thereafter, the company was forced to go out of business.

The Tucker never entered full production, but its design epitomized automotive trends that were new and significant in the immediate postwar years: avant-garde styling, innovative mechanical features, awakening interest in passenger safety, and efforts by small manufacturers to capture a larger share of the new-car market. The Tucker was an exaggeration of these trends and evidence that the desire for change was strong enough to move some fairly radical ideas from the drawing board to the production stage.

Preston Tucker intended to mass-produce a "car of the future" with advanced safety, styling, and engineering features. The automobile has its engine in the rear, an area where the front passenger can crouch during a collision, and a center headlight that turned with the steering wheel. The sedan's most striking feature is its avant-garde styling, developed by Alex Tremulis and J. Gordon Lippincott and Company. Its features-- including pop-up tail lights and irregularly shaped windows--give it a futuristic appearance even today. The Tucker never went into actual production because a federal investigation into the company's management practices led to its collapse.

The story of the car is told in the 1988 film, TUCKER THE MAN AND HIS DREAM starring Jeff Bridges.