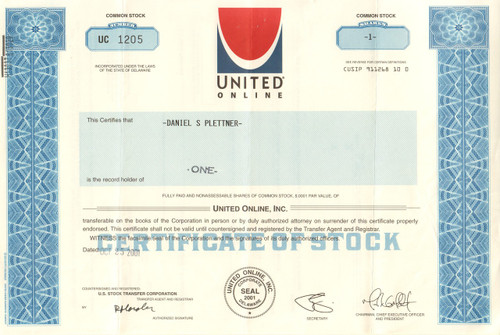 Great internet company stock cert with the company's logo at the top.  Issued and not cancelled. Dated 2001.

United Online, Inc. is a public company formed by the 2001 merger of NetZero and Juno Online Services. The company's range of products and services has evolved significantly since its inception as a provider of dial-up Internet access. This has been aided by a series of acquisitions that have included Classmates Online (2004), MyPoints (2006),[and FTD Group, Inc. (2008). It is headquartered in Woodland Hills, California, United States.

United Online's Classmates subsidiary began digitizing high school yearbooks in 2010, giving members the ability to view more than 30,000 high school yearbooks at Classmates.com. The Classmates Yearbook Initiative has since grown to over 250,000 yearbooks At the end of 2014, UOL rolled out a mobile phone service to their NetZero brand. The service provides limited 4G coverage, and features refurbished equipment and limited monthly data. In November 2013, United Online spun off its floral delivery subsidiary, FTD, which became a separate NASDAQ-traded company called FTD Companies, Inc., under the symbol FTD.