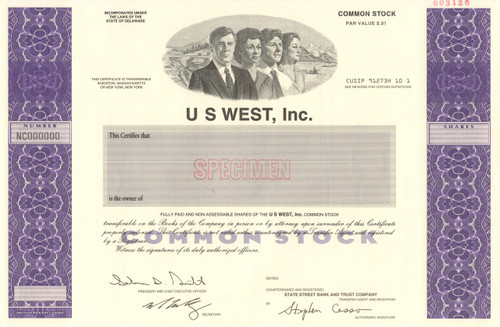 Rare printer sample stock certificate. Fantastic vignette of company employees set against country and mountain backgrounds. Unissued and not cancelled. Crisp and clean from printers archives. Circa 1990 from issued examples.

Until 1990, US West was a holding company with three Bell Operating Companies: Mountain States Telephone & Telegraph (or Mountain Bell, headquartered in Denver, Colorado); Northwestern Bell, then headquartered in Omaha, Nebraska; and Pacific Northwest Bell, then headquartered in Seattle, Washington. In 1988, the three companies began doing business under the US West Communications name. On January 1, 1991, Northwestern Bell and Pacific Northwest Bell were legally merged into Mountain Bell which was renamed US West Communications, Inc. US West was the first RBOC to consolidate its Bell Operating Companies (the other was BellSouth)

In 1998, US West split into two separate companies. Its telephone properties maintained the US West name, while the remaining assets such as cable, wireless and international businesses became MediaOne. The split was structured so that MediaOne Inc. was the legal successor to US West Inc., and US West was the spin-off entity.