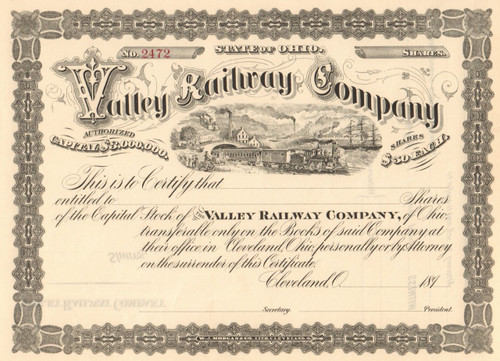 Impressive vignette of a steam train exiting a tunnel with factory and sailing ship scenes in the background.   Unissued and not cancelled. Dated 189_.

The Valley Railway Company was incorporated on August 21, 1871 to build a line from Cleveland to reach the coal fields in southeastern Ohio. Construction began in 1873, but was suspended during the financial 'Panic' of 1874. Construction was resumed in 1878 and completed in 1882. It went south from Cleveland through Akron to Valley Junction, Ohio.