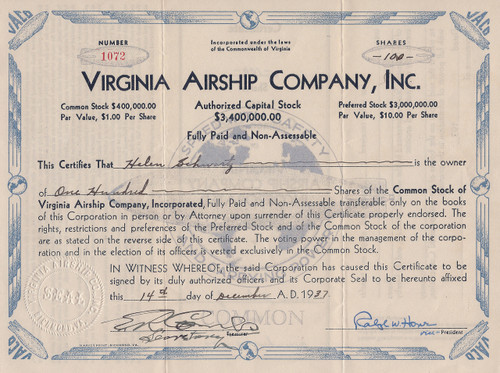 The cert has a fantastic center vignette of a 1930's airship above a world map with the company slogan encircling "SPEED WITH SAFETY AND CARRYING POWER".  Other interesting printings are the zeppelin-shaped boxes for the certificate number and the number of shares.  The border has an airship in each corner with the shortened company name "VACO".

DATED AFTER THE HINDENBURG DISASTER in the same year - the shareholders must have had some kind of faith! This is a very tough piece to find!  Personally, I have been searching for this stock for my personal collection for years.

Incorporated under the laws of the Commonwealth of Virginia (Richmond, VA) in July 1934.  The company made airships (both blimp and dirigibles (balloon vs. rigid hull) for the US Navy during the 1930's and possibly the Army (tested designs with the Army).  The airships were built for lifting (as per the logo) but were also tested for various Navy at sea operations.  Many anti-submarine activities before and during World War II were often completed by airships along the East Coast; however, I do not know if VACO participated in these endeavors.

Of course, the end of the great airship era was on May 6, 1937 when the hydrogen of the Hindenburg was ignited while maneuvering to land at Lakehurst, NJ.  The airship was destroyed by the fire; 35 passengers and crew died.