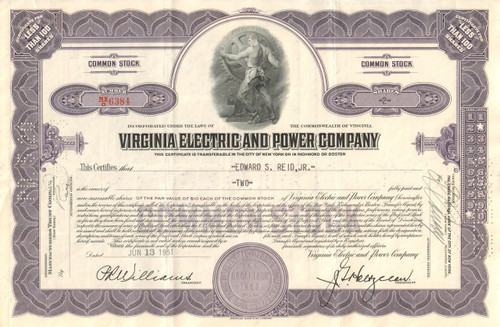 Rare early VEPCO piece with great vignette angel in the clouds handling lightning, map of the United States in the background.  Issued and cancelled. Dated 1950s. Uncommon older issue and a tough find. Only a small number found.

The common phrase "Virginia - owned and operated by VEPCO." was a long standing joke in the state.  The company is now part of Dominion Resources.

Dominion re-branded all of its operations in 2000 to Dominion from Virginia and North Carolina Power as well as Consolidated Gas in order to create a more unified energy company. In 2007, as part of another effort to refocus on core electric and gas operations, Dominion sold most of its Houston-based natural gas and oil exploration and production business for pre-tax proceeds of nearly $14 billion. Its onshore US oil and gas reserves were sold in separate deals to Loews Corporation and to XTO Energy, while its Gulf of Mexico reserves were sold to Eni, and its Canadian reserves were sold to two Canadian trusts. Dominion still retains some production areas in Appalachia, however.